You are here: Home / Health / Why Do We Celebrate Extreme Dog Breeding? 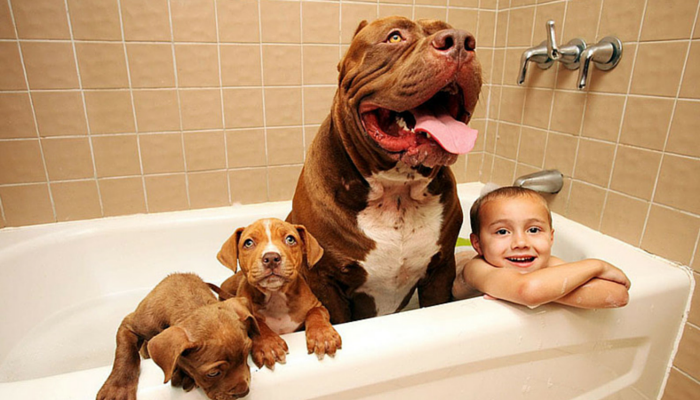 Why Do We Celebrate Extreme Dog Breeding?

I love Bully breeds, but I don’t love how much media attention the world’s biggest Pit Bull is getting. He might be a sweet dog, but there’s nothing sweet about extreme dog breeding. Dogs bred for their extreme size are adding to the problems these dogs face, not helping.

How Much Does a Hulk Puppy Cost?

I’m sure you’ve seen Hulk, the world’s largest Pit Bull. At 175 pounds he’s certainly remarkable. But what do those extreme features cost? If you want a puppy from Hulk’s breeder it’s going to set you back about $5,000.

Hulk, the giant dog, is believed by some to be a cross between an American bulldog and a American pit bull terrier. Not even fully grown yet at 22 months, Hulk currently clocks in at 175 pounds and serves as a cash cow for Dark Dynasty K9s. – Giant ‘Pit Bull’ has Puppies and It’s All Kinds of Wrong

If you want to buy some Hulk “seed” to use for impregnation it’ll cost you $20,000. And if you’re talking about having an actually puppy fathered by Hulk himself the cost of his next litter is estimated at $500,000:

The bone structure, width and head size on these pups are going to turn heads everywhere! If you want a HUGE well put together dog with high drive this is a breeding you don’t want to miss! – Dark Dynasty K9’s 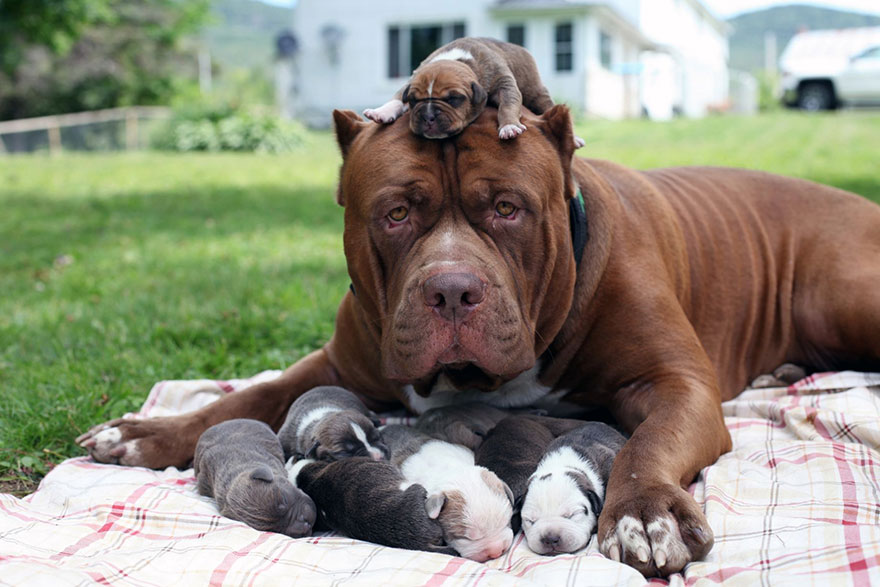 But what about the cost to the dogs themselves? How do you calculate the ethical cost of breeding dogs with health problems, all for the sake of his looks? These dogs are making a sacrifice in terms of their health and well being. And if you’ve ever owned a dog with chronic health issues you know it’s not just the dog that suffers, the toll on owners can be devastating.

I couldn’t find any proof of health testing of any kind at Hulk’s kennel. (Nor could I find any credentials regarding dog training) But that might be due to this statement:

We specialize and take pride in our Executive Protection program and are known for the success of our work and producing the finest DDKLINE XXL APBT. – Dark Dynasty K9s

There aren’t any known standards when you’re trying to produce a new line. His breeder admits that they’re breeding just for size, and apparently that’s all that matters. But this sort of selective breeding increases the risks for multiple health problems.

Some conditions are directly related to the features breeders have sought to perpetuate among their dogs. As they deliberately manipulated the appearance of dogs to create or accentuate physical characteristics that were considered aesthetically pleasing, like the flat face of a bulldog or low-slung eyelids of a Bloodhound, breeders also created physical disabilities.- Dogs That Changed the World

Why Do We Celebrate Extreme Dog Breeding?

My question is why – why are we so fascinated by big heads and that bulky look? Why do we look at photos of dogs with turned in feet, stocky builds, cropped ears and think – wow that looks tough. What’s so tough about bowed legs? Is being less agile a good trait to pass down?

Are we fascinated by them because they look so different? Is it because they stand out from the norm? Are we already bored with the hundreds of breeds of dogs we already have, not to mention all of the doodles and mutts out there?

Over 400 breeds currently exist, but they are artificial constructs of human fancy, instead of the evolutionary outcome of natural selection. – A New Direction for Kennel Club Regulations and Breed Standards

Have you seen what’s happened to the Bulldog over the past 100 years? Once known for being a great athlete they’re now known for being ridiculously unhealthy. They can’t breed or birth on their own anymore, but that hasn’t stopped their popularity from rising. In 2013 they were the 5th most popular AKC registered breed, up from 16th in 2003.

This altered figure makes it nearly impossible for them to reproduce without assistance, and the facial changes cause severe breathing problems in a third of all bulldogs. – Although Purebred Dogs Can Be Best in Show, Are They Worst in Health?

Breeding Dogs for Extremes is Unethical

I am not against breeding, but I am against unethical breeding practices. People that practice irresponsible breeding, like Hulk’s owners, are the ones that give breeders a bad name.

When breeders choose dogs for extreme physical features that dog’s well being isn’t in mind, and neither is the health of their future litters. Selective breeding gives us the ability to manipulate natural selection, and it carries a heavy ethical responsibility. We need to keep the health of the dogs in mind, not just focus on aesthetics.

Any breeder that selects for something as specific as size, even if it is toy or teacup, is forced to narrow the breeding pool to fewer animals and that is how genetic abnormalities get concentrated in a blood line. – Community Speaks Out About Giant 173-pound Pit Bull

Working dogs should be bred for their ability to perform, not the biggest skull possible. For these extreme breeders it all comes down to profit. How much money can you get for a remarkable looking dog? A lot more than just your normal looking one apparently.

I find it ironic that people are willing to spend so much money on a Hulk’s pups, a breed* that makes up about 33% of the dog population in our nation’s shelters.

While some of us believe that there is such a thing as responsible, ethical breeding, none of us will jump to defend someone who is exploiting animals. Breeding protection dogs and selling them for $20,000 is not ethical. Breeding for weight and head circumference is certainly worlds away from responsible breeding. Ear cropping, completely illegal in some countries, seems to be the cherry on top of an exploitation sundae. – Hello Bully

*There’s more than just one kind of “Pit Bull,” and there are a lot of bully breeds.

There’s nothing wrong with having your mind set on a specific breed of dog. You can find breed specific rescue groups or go through a breeder, but keep in mind there’s a lot to consider when finding a responsible breeder. Most puppies should have written documentation from the OFA or PennHip for hip dysplasia, as well as a current Canine Eye Registry Foundation (CERF) exam, but there are a lot of variations that are breed specific.

Start by checking out the Canine Health Information Center to find out what screenings are recommended for any given breed.

As for Pits, We Can Find a Better Role Model

Hulk’s face is everywhere, and if I can ask one thing it’s that we stop celebrating him. He’s a reminder of what’s wrong with natural selection, not a role model. So please, next time you see a story like this one from from Hello Giggles don’t share it, let’s not add to the celebration. 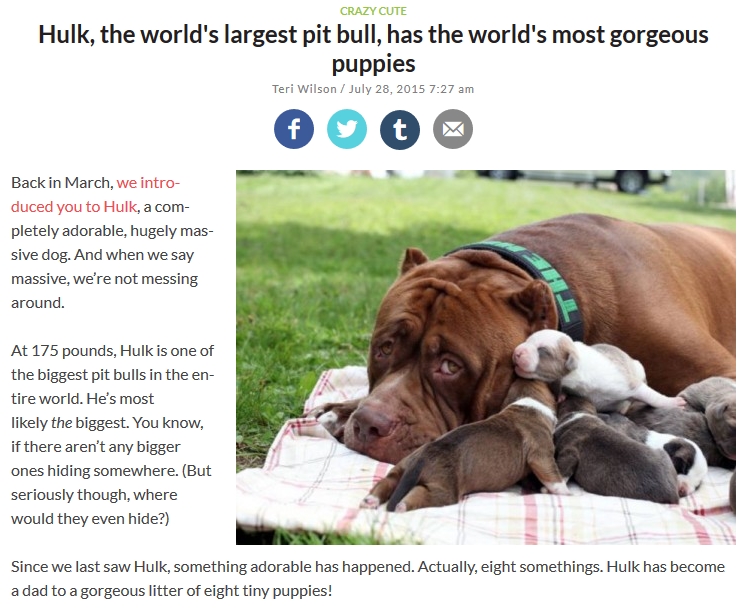 Over the past few days there have been many stories praising Hulk like this one from Hello Giggles. He’s appeared on Time, CNN, Huffington Post, ABC, the Telegraph, Daily Mail, CBC, Express, & Metro to name a few.

Let’s Celebrate Some Heroic Dogs Instead

If we’re going to celebrate Pit Bulls let’s choose a better role model. Unethical breeding aside when we focus on Hulk we’re just celebrating extreme genetics, not merit or performance.

Which Pit Bull do you think should be getting the media spotlight? My vote would go to Raja, the dog credited with saving his human during a fire. Or Hades, the dog who saved an 8 year old boy from a bee attack.

There are a lot of great Pit Bulls we should be celebrating based on their merits, not the size of their skull. I know we can find a much better advocate than Hulk (no offense to Hulk himself, he’s probably a really nice guy).

Can You Get Poison Ivy From Your Dog?
Why Do Dogs Snore?
10 Ways to Help Keep Your Arthritic Dog Comfortable
248 shares
« Looking For a Laid Back Companion? Check Out Tiger – Adopted
Roundup 25 – Favorite Dog Stories of the Week »