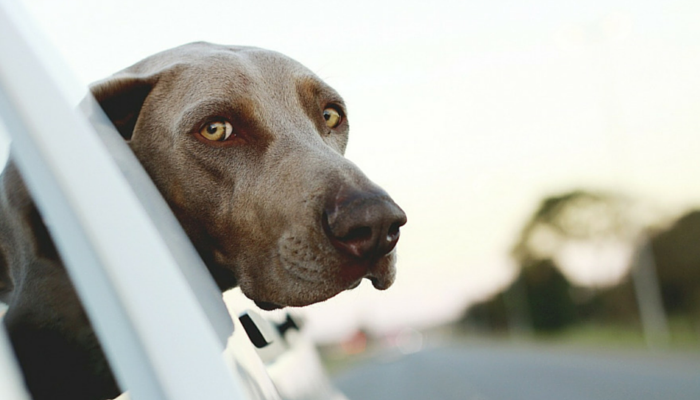 Why Do Dogs Stick Their Heads Out Car Windows?

When was the last time you saw a dog with his head out the car window looking sad? Unless it was a St. Bernard chances are probably never (they always look sort of sad, don’t they?). Why do dogs stick their heads out car windows, and why do they love it so much?

Why Do Dogs Stick Their Heads Out Car Windows?

I’ve yet to own a dog that doesn’t love sticking his head out the window. It’s a great way to take in a ton of sights, sounds, and smells. For many dogs the opportunity to get out and experience some of that outside world, even from a car window, is pretty exciting.

Dogs Love Checking Out The Scenery

Laika absolutely loves having her head out the window, and she loves it even more when she gets to “speak” to another doggie outside. I’ve been working on getting her to use her polite indoor voice as we pass other dogs, but it’s not quite fool proof yet.

Most of our dogs spend the majority of their time indoors, so when they get the chance to go out and see some so much of the outside world they can get pretty giddy. What dog doesn’t respond to “wanna go for a ride?” Jumping in the car, regardless of destination, is a sensory overload for our canine companions.

I imagine for our dogs a ride in the car is just as exciting as when we go to a carnival. Being surrounded by all those sights, sounds, and smells can be quite stimulating, regardless of whether you go on any of those rides. The atmosphere itself is exciting and memorable.

Things like a wider view of the passing scenery and increased accessibility to enticing scents outside the moving vehicle can be irresistible to an animal whose sense of smell is so much more sensitive than ours.- Vetstreet

Dogs Love All Those Smells

Since dogs take in so much information about their surroundings via their nose all those outside odors become quite enticing. Dogs not only pick up a ton of different odors with that awesome nose of theirs, they also have an organ called the vomeronasal organ (also known as Jacobson’s organ) that lets them sniff our pheromones.

Dogs are able to keep their odor detection & pheromone molecule analysis separate. The vomeronasal organ has it’s own set of nerves leading to the dogs brain that’s solely dedicated to interpreting those pheromone signals. Imagine how much information your dog is able to take in, just by having his head out the window.

The faster you’re going the more your dog can pick up about the outside world. It’s estimated that dogs can detect some odors in parts per trillion. They posses up to 300 million olfactory receptors in their noses, compared to about six million in us. And the part of their brain that is dedicated to analyzing smells is roughly 40 times greater than our own.

As air moves over the olfactory membrane, odor molecules settle on the scent receptors and get recognized. The more air there is flowing over the membrane, the more scents the dogs can detect. – Mental Floss

The Dangers of Dogs Hanging Their Head Out of Cars

As with so many other enjoyable things in life there’s a lot of potential dangers when you allow your dog to hang his head out the window.

Have you ever had your windshield chipped by a small pebble? Imagine what that would be like hitting your dog while his head is out of the car window. When your dogs head is hanging out the window he’s susceptible to getting hit with any of those rocks or dust your car kicks up. If any of that debris hits your dog in the eye it can lead to serious injury.

Ear damage is another concern. Dogs that hang their heads out of car windows are at risk for developing ear infections from any wind blown particles or by the wind itself blowing directly into their ears. The constant flapping of a dogs ears can cause the ear flaps to swell, and repeated trauma to the ears can cause scar tissue to form inside the soft tissue of his ears. Trauma to the ears can cause permanent damage and leave a dog with lifelong ear problems.

If there was another dog or squirrel on the side of the road would your dog try to jump out the window? Some dogs certainly will, and even at slow speeds jumping out of a moving car can cause serious injuries.

It’s recommended to have you dog restrained in the car if you’re going above 25 mph. With an unrestrained dog the faster you’re going the higher the potential danger.

A few basic safety tips for riding in the car with your dog.

Do You Let Your Dog Stick His Head Out of Car Windows?

I’ll be the first to admit I let Laika stick her head out of the car window, but only around our neighborhood where we drive pretty slow. I never roll the window all the way down either, it’s not worth the risk of her jumping out.

Laika loves our little trips around the neighborhood, and as long as she’s not shouting at every stupid squirrel we pass I don’t mind at all.

Is your dog allowed to stick his head out your car windows? Have you ever had a dog jump out? Does your dog like to bark at every moving thing you pass?

Check out out the Rest of Our “Why Do Dogs” Series:

Why Do Female Dogs Get Blamed For Dead Grass?
Why Does My Dog Itch So Much?
Why Do Dogs Take So Long to Poop?
Why Do Dogs Drag Their Butts on the Floor?
422 shares
« Weekly Roundup 22 – Dog Stories, Deals, and Videos
Help Take a Stand Against Puppy Mills in Michigan »