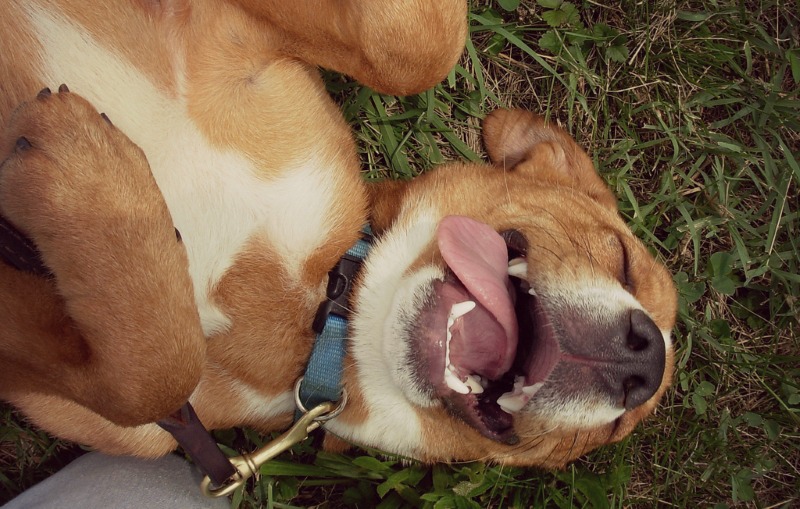 Why Do Dogs Love Belly Rubs? 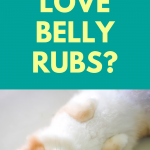 When your dog rolls over on their back and offers you their belly it’s a sign that your dog trusts you, not just a sign of submission. Tummy rubs feel good and they don’t mind showing you this vulnerability for a nice old fashioned belly rub. The fact that the behavior is submissive does not mean that the dog is enjoying the petting any less. Seems like a pretty fair trade off right?

While there might not seem to be anything scientific about a belly rub there has been evidence supporting why our dogs love them so much. Dogs and other mammals have a specific brain neuron that responds to the stimulation of hair follicles. That reaction helps explain why our dogs love being pet so much.

While most dogs tend to enjoy a nice belly rub it should never be forced. If you force a dog onto his back you’re likely going to create other anxious behaviors. There are plenty of ways to gain a dogs trust, and by forcing a dog to do something they’re not comfortable with you’re going to lose trust in the process.

If you’re unsure about your dogs comfort level check to see how tense he looks. A relaxed dog will look loose and floppy. If your dog shows any signs of being uncomfortable such as tucking his tail between his legs or hunching up his body stop and move away.

If your dog moves away or seems to relax once you stop that’s a good signal that he’s not comfortable with the belly rub. If he wants more he’ll let you know; dogs have a great way of asking us for what they want.

Why Do Dogs Kick Their Legs When Getting a Belly Rub?

What about all that leg kicking? Lots of us refer to it as ‘the tickle spot,’ that special place you scratch on your dogs belly to make his legs twitch and kick. It isn’t actually tickling at all, it’s an involuntary response.

It’s called the scratch reflex and it’s just like the reflex test a doctor performs on your knee; it’s used on dogs to test for spinal or nerve problems. It activates nerves under his skin which are connected to the spinal cord. It relays a message for him to kick his legs to get rid of the irritant. just like when their skin twitches when a bug lands on their back.

The scratch reflex developed in dogs to help protect them against irritants on their bodies. Collections of neural pathways connect to your dogs spinal cord – when activated they send the message to the brain to kick. It’s an automatic response that helps keep your dog away from danger – the spinal cord tells the leg to kick before the conscious brain makes the decision. It’s a matter of self preservation.

So when Fido starts to kick his leg when you’re rubbing his belly you’ll know why – it’s an involuntary response.. That’s not to say that dogs are annoyed by belly rubs, it’s just that their involuntary leg kicking isn’t a sign of them being ticklish.

Dogs shake or kick their legs when you scratch them because of something known as the scratch reflex. It’s a completely involuntary reaction, which explains why your dog may look as puzzled as you do when it starts to happen. When you scratch or tickle your dog’s belly, it irritates him, much the same way that the wind or a bug might. It activates nerves under his skin that are connected to his spinal cord and relays a message to his leg muscles to kick in an attempt to get rid of the irritant. Of course, you’re the one both providing the “itch” and “scratching” it, so it’s a completely pointless act. – Animal Planet

To Rub or Not to Rub, That is the Question

Not all dogs like getting belly rubs. If your dog isn’t rolling over and offering up his belly on his own, chances are he’s just not into belly rubs. Just like people all dogs are different, and there’s no need for concern if your dog doesn’t seem to enjoy belly rubs.

Dog’s generally loves petting of any kind, but the belly rub seems to bring a special kind of bliss for some dogs. If a dog offers you their belly by all means go hog wild.

If your dog isn’t a fan of belly rubs no need to worry; there’s plenty of other ways to bond with your canine companion. Check out our list of 26 ways to relieve dog boredom, 10 ways to keep your dog mentally stimulated & 33 simple indoor games for dogs.

Hosted by Ruckus the Eskie

Scientists Are Saving Africa's Wild Dogs...With Urine
How Boredom Caused My Dog to Hide Her Toys
Why Do Dogs Love to Lay In The Sun?
586 shares
« Help Rook – Fundraiser For Spinal Surgery
Why Not Build a Dog Cart? »