You are here: Home / Dog Articles / Help Take a Stand Against Puppy Mills in Michigan 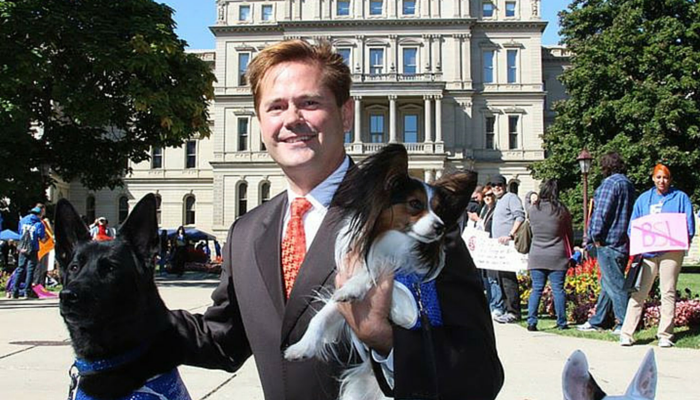 Help Take a Stand Against Puppy Mills in Michigan

If there’s one thing that makes me furious it’s the puppy mill industry. It’s hard to imagine a fate much worse than a puppy mill dog. Forced to live in filthy, crowded cages, and being bred at every possible opportunity just for the sake of profit. It’s hard to imagine how they still exist given all that’s known about their cruelty, yet so many still remain in business.

On May 19 Senator Bieda (seen in the featured image) introduced the The Large Scale Commercial Dog Breeder Act. This legislation will enact registration, standards, and a reasonable limit on the number of breeding dogs, and it will help stop puppy mills from establishing themselves in Michigan.

Taking a Stand Against Puppy Mills in Michigan

I support local rescues and try to expose the unethical and cruel practice of commercialized breeding, but I have to admit, I’m not a strong leader when it comes to organizing others. That’s why I’m thrilled that there’s a wonderful group of volunteers in my area that spends their time taking a stand against puppy mills.

If you’re in Michigan check out the Puppy Mill Awareness of Southeast Michigan. They hold many events throughout the state and help promote laws that protect animals, giving us Michiganders the opportunity to join in and take a stand against puppy mills.

I feel lucky to live so close to the Puppy Mill Awareness of Southeast Michigan, a huge group of volunteers that’s dedicated to putting an and to puppy mills in our area. They help educate the public about the unethical practice of commercialized breeding (puppy mills), encourage pet stores to become “pet friendly: by not selling animals, pass stronger laws to protect animals, and promote the benefits of adopting animals through rescues and shelters.

The Puppy Mill Awareness Meetup of Southeast Michigan is working to end the mass production of dogs in commercial kennels (“puppy mills”). Our mission is to educate the public about the cruel cycle of commercial dog breeding and the pet store link.

The only way to end commercial breeding facilities (puppy mills) is to stop the sale of puppies sold in our local pet stores. Most estimates suggest that 99% of all the puppies in pet stores come directly from puppy mills.

Photo from the Puppy Mill Awareness Day event in Lansing 2012. The group met with representatives to gain support for the Puppy Protection Act & Pet Lemon Law.

Petland is the nation’s largest puppy retailer, and they have one location left in Michigan at the Twelve Oaks Mall in Novi. They’ve been exposed by Animal Planet, the Humane Soceity of the United States, and Channel 7 as selling sick puppies from commercial breeding facilities all over the country. The Novi Petland location takes in 88 puppies per month on average, and one of their biggest suppliers is a huge puppy mill in Kansas that houses 773 adult dogs.

Each year the they hold a Puppy Mill Awareness Day event, and this year’s is taking place on September 27. They’re forming a human chain in front of the Twelve Oaks Mall and across the street from Fountain Walk, home to Michigan’s largest retailers of puppy mill dogs: Petland and The Family Puppy. Last year’s event had over 200 participants, as of today (a few months away) there’s already 127 people signed up. 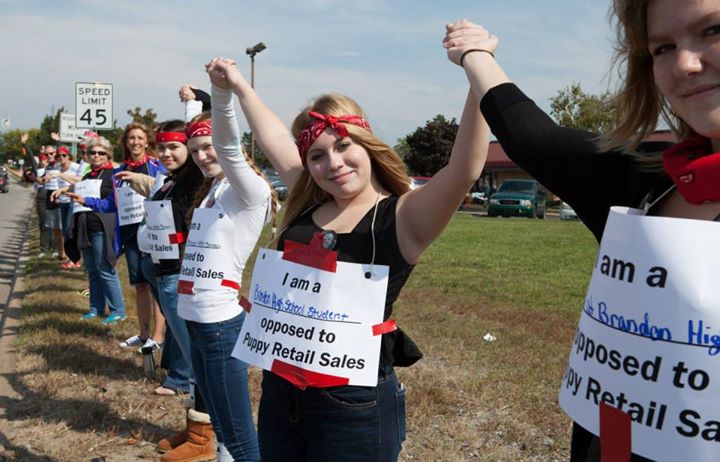 Why must we protest pet stores? Protesting should be the last resort. We often meet with the store owner(s) well before protesting.  We ask the store to stop selling animals acquired from breeders and instead support only adoption efforts. Shipping records prove that most of our local pet stores work with out-of-state commercial breeders “puppy mills”, even though the dogs are marketed as “AKC certified” or from “reputable” or “USDA licensed” breeders. Pet stores will tell you that they do not get their dogs from puppy mills, but only these mass-breeding facilities can fulfill the demand. – Puppy Mill Awareness

If you’re in Michigan come out & join us, let’s help take a stand against puppy mills. If you can’t make it to the event on September 27 but live in Michigan follow them on facebook to stay up to date on all of their upcoming events. We can’t do everything, but together we can certainly do something. Let’s join together and put an end to puppy mills. 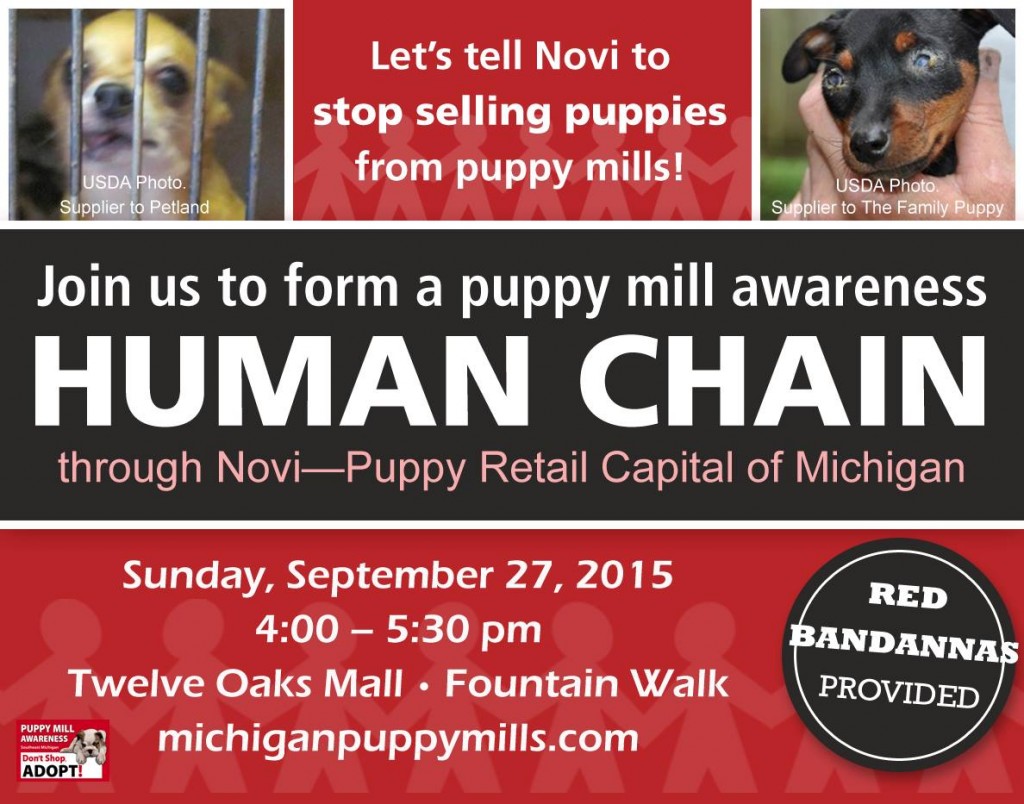 Want to Help Take a Stand Against Puppy Mills?

If you’re against commercialized dog breeding but don’t know how to help try searching for some local groups. If there’s one here in southeast Michigan I know there’s plenty more out there. A good place to start is the Companion Animal Protection Society, the only national non-profit organization dedicated to protecting companion animals from cruelty in pet shops and puppy mills.

Beyond joining groups there’s lots of simple steps you can take to help put an end to puppy mills: 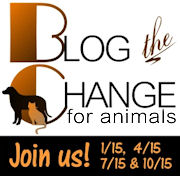 This post is part of Blog the Change, hosted by Be the Change for Animals. Be sure to visit all of the other amazing posts below and help spread the word by sharing your favorites on social media with the hashtag #BtC4A.

35 Dogs Rescued From Georgia Puppy Mill
Want California To Ban The Sale of Puppy Mill Dogs in Pet Stores? Now's The Time To Show Your Suppor...
N.J. Bill Aims at Cracking Down On Puppy Mills
227 shares
« Why Do Dogs Stick Their Heads Out Car Windows?
Roundup 23 – Favorite Dog Articles, Deals, & Videos of the Week »