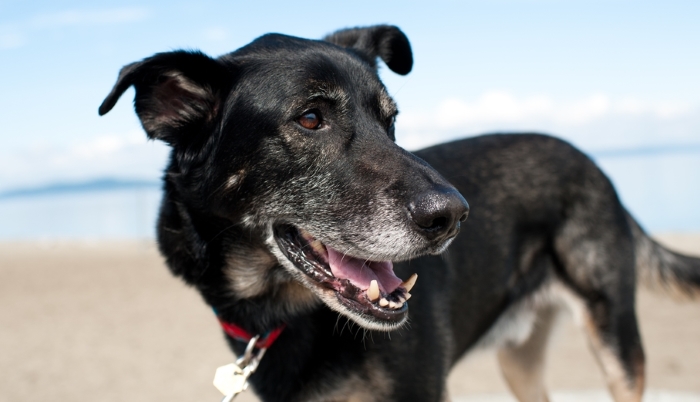 Why Do Dogs Go Grey Early? 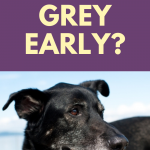 Laika’s already going grey, though she’s only 3 years old. Looking back all of my dogs went grey eventually, but it never started quite that early.

So it got me wondering — why do dogs go grey early anyway? It it all genetics? Is it stress related? And why do some dogs go grey much earlier than others?

Why Do Dogs Go Grey Early?

Is your dog doing grey around the muzzle? Just as it is with humans there’s a couple different reasons as to why some dogs go grey early while others don’t grey much at all.

Two major factors come into play when it comes to dogs going grey — stress and genetics. Dogs with high levels of psychological stress or anxiety have been found to grey earlier, and the cellular stress that causes grey hairs has a genetic component in dogs.

On average most dogs start going grey around 5 years old, though some start going grey before the age of 2. Greying in dogs can occur anywhere, but it tends to be most prominent on their muzzle.

Geriatric vs Progressive Greying in Dogs

The premature greying I’m talking about with Laika is sometimes called geriatric greying, and it usually starts around the muzzle. It’s the greying that’s associated with the aging process, the same one that happens to humans.

Some breeds, such as Poodles and Bearded Collies, have the greying gene that causes their entire coat to turn silver. Because the progressive greying gene is dominant it’s also seen in some mixed breeds, especially in the UK where Bearded Collie & terrier crosses are common.

What Causes Premature Greying in Dogs?

Though the specific gene that causes premature greying has yet to be found, experts say that cellular stress is what causes grey hairs. Over time we create less melanin, the black or brown pigment that occurs in the hair, skin & eyes of humans & animals.

Scientists traced the loss of hair color to the gradual dying off of adult stem cells that form a reservoir that spawns a continuous supply of new pigment-manufacturing cells, called melanocytes, that give hair its youthful hues. – Science Daily

The Influence of Genetics On Going Grey

Genetics is a big influence in premature greying, in both dogs and humans. The pigment cells that give hair it’s youthful color are called melanocytes, and when they die off or grow incorrectly greying starts to occur.

Cell survival in general is influenced by an “anti-death” gene known as Bcl2. So the study included mice without the gene. Turns out they lose their melanocyte stem cells shortly after birth and turn gray quickly. Could be, Fisher said, that people who gray prematurely have mutations that knock out Bcl2. – Live Science

The pigment cells responsible for our hair color undergo levels of cellular stress that lead to greying. When they die off or develop in the wrong part of the hair follicle our hair goes grey.

The blame lies on “genotoxic stress,” or stress from mutagens that can cause damage to DNA, such as ultraviolet light. The researchers found that this cellular stress diminishes the supply of melanocyte stem cells (MSC) — cells in hair follicles that are responsible for making the pigment-producing cells that give hair its color. – Live Science

The Influence of Stress in Premature Greying in Dogs

We’ve all heard that stress can cause premature grey hairs, but can the same be said for our canine companions? Scientists are trying to figure this out, but early research points to yes.

One recent study surveyed the owners of 400 dogs aged 1-4 who were showing signs of premature greying. Based on answers provided researchers concluded that psychological stress & anxiety may indeed play a role in the premature greying of young dogs.

Researchers were able to predict premature greying in dogs that exhibited anxious or impulsivity behaviors at home. These include:

The study did not find any predictors of premature greying when looking at a dogs age, size, sex or spay/neuter status.

The current dog study by King and colleagues finds that premature graying could link up with anxiety, impulsivity, or fear issues, which are not fabulous if you are a dog. – About That Premature Greying, Scientific American

Can Medical Issues Cause Greying?

In a few instances your dogs early graying could be caused by a medical issue. If you suspect your dog has a medical problem please consult your veterinarian.

One of the main symptoms of hypothyroidism is multiple hair changes which includes hair loss, coarseness, dark skin pigmentation, and premature greying of the muzzle.

Because of all the variables associated with coat colors a dog’s grey muzzle isn’t always an accurate way to estimate age. Dogs as young as 2 can have a lot of grey around their muzzle and eyebrows, though it’s often associated with dogs in middle to old age.

The condition of a dog’s teeth can usually give a more accurate indicator of a dog’s age, though it’s not an exact science because of outside influences. Estimates are made by the amount of tartar buildup and how worn down the incisors are. A dog’s lower incisors tend to remain uneven until a dog reaches middle age. 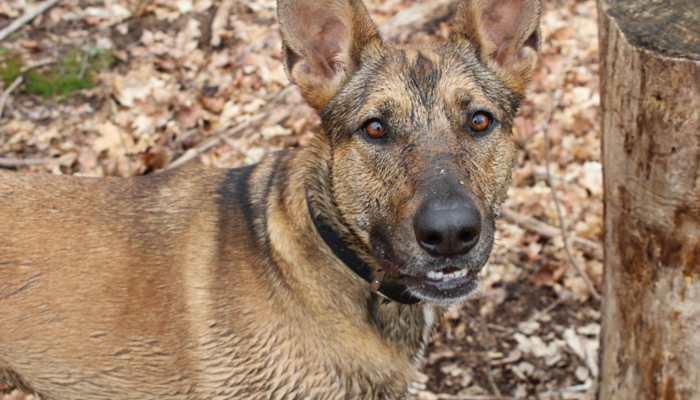 Though Laika has premature greying her uneven lower incisors are a more accurate indication of her age.

So When Does a Dog Normally go Grey?

On average it’s around 5 years old, but varies greatly. Premature greying is rarely cause for medical concern, but as always if you suspect something may be wrong please consult your veterinarian.

When it comes to going grey early dogs are just like us. Some go grey really early, some never will, but most are somewhere in the middle. Premature greying is just an aesthetic thing, and rarely cause for concern.

Age is an issue of mind over matter. If you don’t mind, it doesn’t matter. – Mark Twain 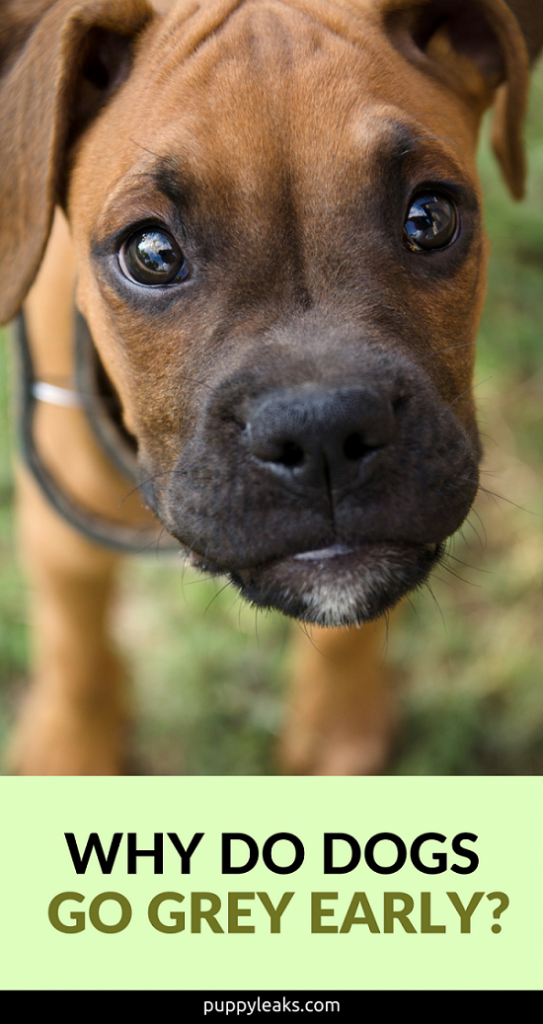 Check out out More of Our “Why Do Dogs” Series: 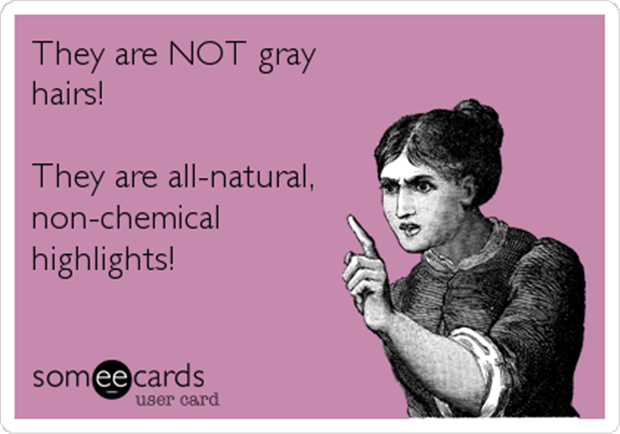 My favorite comeback about grey hair via dumpaday