You are here: Home / Research / Do Dogs Have Good Night Vision? 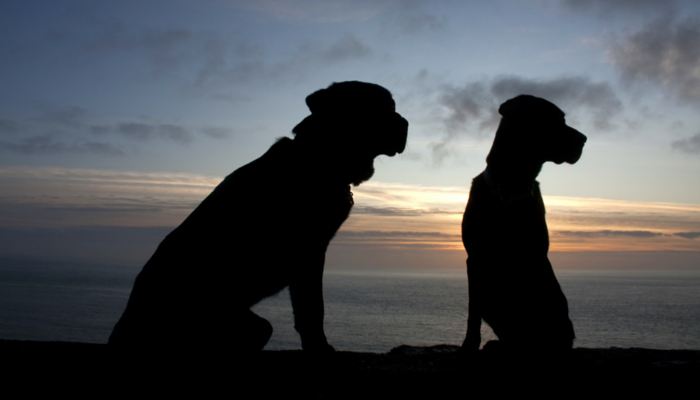 Do Dogs Have Good Night Vision?

Do Dogs Have Good Night Vision?

Do dogs have good night vision? As it turns out our canine companions can see pretty well in the dark, but not quite as well as our feline friends. When it comes to night vision dogs have a few anatomical advantages over humans, and it’s estimated that they can see things in light that’s five times dimmer than what we can see.

A larger pupil lets in more light. The center of the retina has more of the light-sensitive cells (rods), which work better in dim light than the color-detecting cones. The light-sensitive compounds in the retina respond to lower light levels. And the lens is located closer to the retina, making the image on the retina brighter. – How Well Do Dogs See at Night? University of Wisconsin

Your dog can see better in the dark than you can because of the way there eyes are structured. They have large pupils that let in more light, and they have more light and motion sensitive cells (rods) than we do. Those cells help them distinguish light from shadow, and they’re more apt at seeing in lower light levels than ours are.

The Science Behind How Dogs See in the Dark

Have you ever noticed your dogs eyes glowing in the dark? That glow is called eyeshine, and it’s part of what makes dogs able to see so well in the dark.

The tapetum lucidum is a layer of tissue in the eyes of many animals have, including dogs & cats. It lies between the animals’ retina and optic nerve and acts like a mirror. It greatly increases the amount of visible light available to the photoreceptors. The photoreceptors are specialized cells in our eyes that respond to light. When light shines into the eye of an animal with a tapetum the pupil appears to glow, and that’s what causes their eyes to glow in the dark.

Dogs posses a tapetum, a mirror-like structure in the back of the eye that reflects light. This structure bounces the light waves back at the retina a second time, increasing the retina’s chance to collect the light. It is the tapetum which causes dogs eyes to glow in the dark. – How Well Do Dogs See? Service Dog Central

That layer of tissue is why our dogs have good night vision. The tapetum allows animals to see things at night that they otherwise wouldn’t, it’s an evolutionary advantage for nocturnal animals that are active at night.

The tapetum lucidum represents a remarkable example of neural cell and tissue specialization as an adaptation to a dim light environment and, despite these differences, all tapetal variants act to increase retinal sensitivity by reflecting light back through the photoreceptor layer.- Comparative Morphology of the Tapetum Licidum

Why Do Dogs Eyes Glow in the Dark?

Have you noticed that your dogs eyes seem to glow in the dark? That eyeshine effect we see in animals, including our dogs, helps them to see better in the dark. It gives them the ability to easily identify other animals in the dark.

Dogs have evolved to see well in both bright and dim light, whereas humans do best in bright light. No one is quite sure how much better a dog sees in dim light, but I would suspect that dogs are not quite as good as cats. – Science Daily 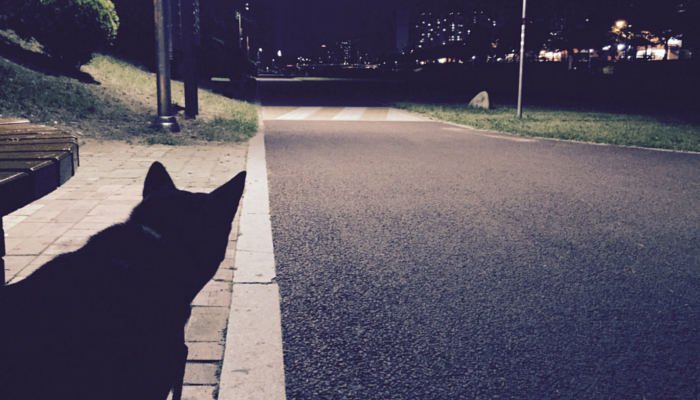 What color do your dogs eyes glow?

Eyeshine Glows in Many Different Colors

The color of your dogs eyes and his age influence the color his eyes will glow in the dark. Older dogs generally have denser lenses which causes less light to be reflected. The kind of light, and the angle at which it’s being shone also cause wide variations on the glow color.

The specific glow color varies by animal and the amount of zinc or riboflavin present in special pigment cells within the tapetum lucidum. – Why Do My Dog’s Eyes Glow in the Dark?

Glowing Eyes in Photos is Also Due to the Tapetum

The tapetum is also what causes glowing eyes in photos, something many of us amateur photographers are quite familiar with. Dogs with pale colorings, such as Red Siberian Huskies and Siamese cats commonly have a ‘red eye’ effect in photographs, just like many people with blue eyes.

If your dogs eyes are darker in color they’re more likely to give off a blue or green glow in photos. Most puppies have a blue tapetal reflection until the structures in the back of the eyes mature around 6 months of age.

If your dog consistently has red-eye in photos, he might not have pigment in the tapetum. This means the red is coming from blood vessels at the back of the eyeball, which is also the cause of human red-eye.  – What Makes Your Pet’s Eyes Red in Photos? 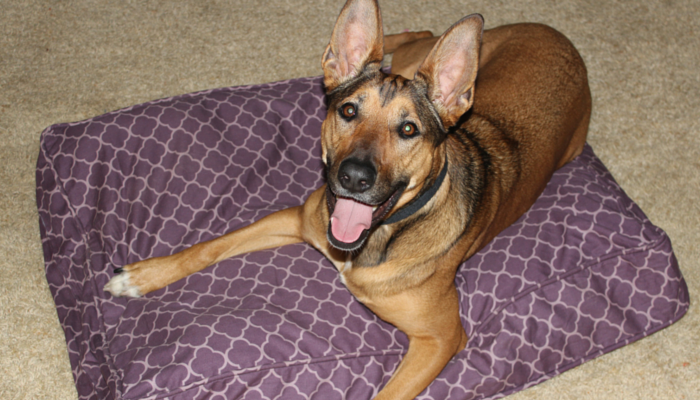 Laika demonstrating her green eyeshine, thanks to her tapetum and an indoor flash.

Does You Dog Have Good Night Vision?

Can your dog see in the dark? What color do your dogs eyes glow? What do you think; does your dog have good night vision?

« Roundup 23 – Favorite Dog Articles, Deals, & Videos of the Week
Why Do Dogs Have Belly Buttons? »