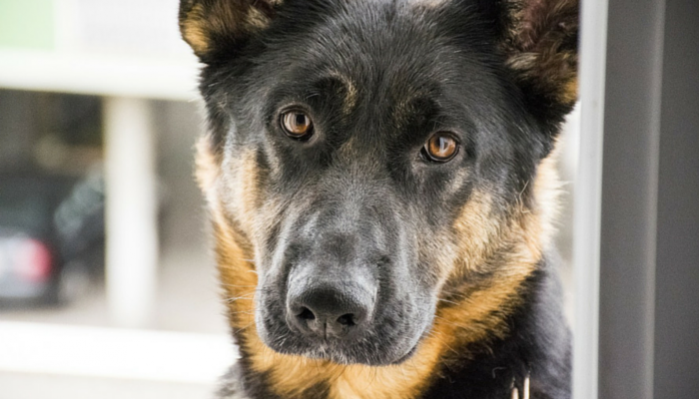 After a few years you’d think certain viral videos would die down; but this one hasn’t – at least not on my facebook feed. When someone shares that video of the guy walking his 5 German Shepherds off leash I cringe. I cringe because I’m reminded of the other videos he’s posted that show how he trains his dogs –  through abuse and intimidation.

With over 12 million views I’m pretty sure all of us have seen that video of the guy walking Shepherds off leash in the city. If you search for it you’ll see hundreds of pages like “Man Walks Pack of German Shepherds Without Leashes” and “What This Man Does With His Dogs is Unbelievable.”

The video does seem impressive. While I would personally never walk my dog(s) off leash in the middle of a city it’s hard to not be amazed by how well they seem to listen to him.

But the problem is people only see that video — the one that seems impressive. They aren’t seeing the others that show his abusive training methods. After watching the video where he walks his dog “like a boss” they go to his breeding page (where he sells training services & puppies for about $3000), and try to figure out how he does it. He has over 13,000 subscribers on YouTube where he shares many “tips on how to train your dogs.” 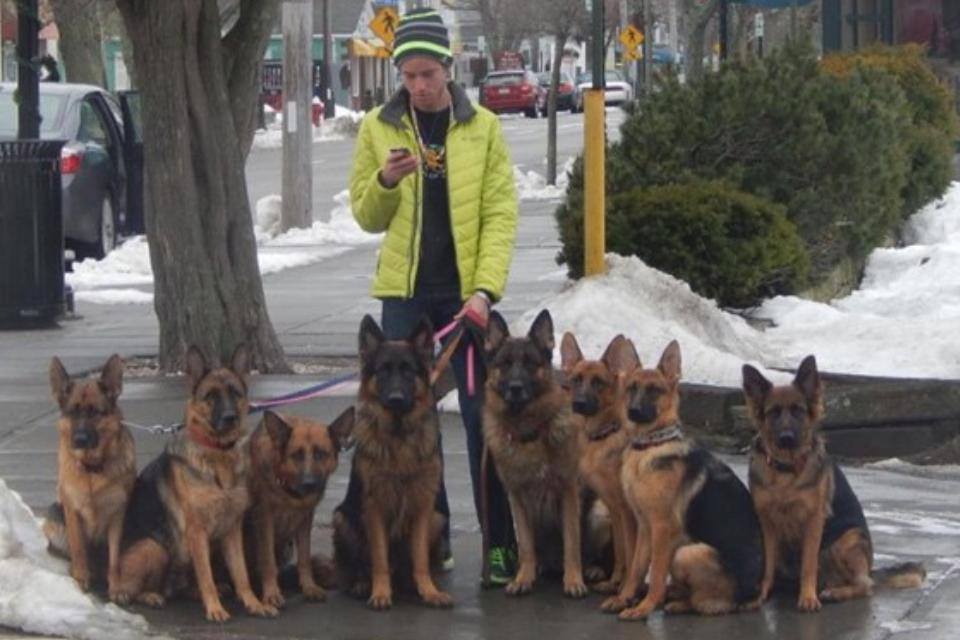 There’s Nothing Impressive About His Handling of Dogs

Unfortunately there’s a lot more to the story than just a guy who has some well trained dogs. The man in the video, Augusto DeOliviera, runs Griffin Shepherd Kennels and he’s no stranger to controversy. Over the past few years since that video went viral he’s been accused of animal abuse and is facing multiple counts for selling sick puppies.

His Dog Training Methods Are Abusive

He has no formal certification in dog training. He uses prong collars on puppies, hits dogs trapped in crates to promote aggression, and withholds water to get the “desired behavior.” Many of his methods are beyond harsh; they’re abusive.

The animal abuse is made apparently clear in videos like this https://www.facebook.com/video.php?v=764138360294633 ( Warning: the video is extremely disturbing and not appropriate for those who don’t want to see animal violence ) in which he allows one of his dogs to attack a puppy that walked out the door before the older dog (in his mind that’s a sign of disrespect and thus justified).

There are other videos in which he hits his dogs, prods them with broomsticks, swings a dog around by her hind legs to break up a fight, feeds them roadkill, and makes them “work things out” through fighting. I don’t want to share those videos here. They’re not hard at all to find for those that can stomach it. I’m not here to make you watch animal abuse, I’m here to show that things aren’t always what they seem.

He’s been trying to clean up his image by deleting such videos but the damage is done; they’re not something I’ll forget. He’s been deleting comments and reporting people who question his methods; on many of his videos the comments are disabled altogether. Any “trainer” that abuses dogs needs to be called out; not revered.

He’s facing multiple documented complaints due to selling puppies from parents who were not OFA screened for hip or elbow dysplasia, nor checked for Degenerative Myelopathy (DM checked), despite his assurances that the parents were “fully tested.” He has sold puppies without vaccinations and puppies which were deemed “unfit for sale” by veterinarians.

He sold one puppy which died of Subaortic Stenosis. When his breeding stock was called into question he admitted that the puppy had been born to a rescue dog and had gotten “accidentally” mixed in with the very high priced pedigreed puppies. He has failed to deliver proper documentation even after multiple requests – – proof of vaccination, AKC papers, and veterinary records.

His kennel was ran for years without a business license, no liability insurance, and in violation of cease and desist orders from the town of Barnstable, MA.

Griffin Shepherd Kennels has been under quarantine since May 28 due to a parvovirus outbreak. The state also found that 8 of his dogs weren’t vaccinated for rabies which is required by state law. As of May 2015 there’s 9 complaints filed against Griffin Kennel Shepherds filed with the Massachusetts Attorney General by owners claiming he sold them sick puppies.

Unfortunately there’s a lot of irresponsible breeders out there, and just like Augusto they’re getting away with charging thousands of dollars for their puppies.

Next Time You See That Video Posted

So please – next time someone shares that video of him walking his dogs “like a boss” off leash remind them that things are not always what they seem. Share this article or any of the ones below; don’t let this guy fool anyone else.

No one should be buying dogs from this guy or hiring him to train their dog. Sure he walks his dogs “like a boss,” but that’s far from impressive when you’re resorting to abuse.

Please Stop Asking "Whose Walking Who?"
Kansas Police Save Dog From Overpass
20 Fruits & Veggies That Are Good For Dogs
5 Things Not to Do When Teaching Your Puppy Not to Bite
9114 shares
« Holy Cow – It’s Our One Year Blogiversary
Weekly Roundup 18 – Our Favorite Dog Stories, Deals, & Videos »