You are here: Home / Dog Training / A Game of Tug is The Best Training Reward I’ve Found 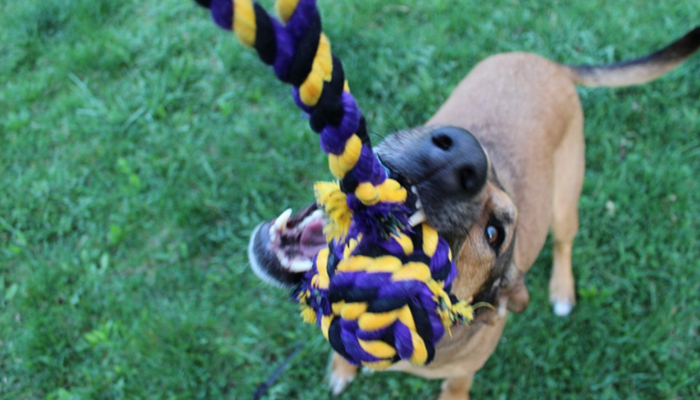 There’s two things in this world my dog Laika doesn’t get tired of – chasing kitties and playing tug. Luckily I found that a nice game of tug will trump terrorizing the neighbors kitty.

When I first adopted Laika we made a lot of progress right away with some basic obedience training using a clicker and some food rewards. As we started to tackle some more advanced behaviors such as “don’t you dare chase that nice kitty” and “please don’t lunge at small dogs” I ran into some problems.

Some situations were just too distracting –  my food rewards weren’t enough. I understood it, but I wasn’t sure how to fix it. If I were a young high drive dog I’m sure I’d much rather chase that kitty than get a bite of kibble and pat on the back. So I upped the food rewards – we tried chicken, turkey, and some super smelly store bought dog treats. Still no luck.

Have you seen the way agility dogs look at their owners? They compete in the most chaotic of situations and still seem to never take their eyes off their handler.

That’s the sort of focus I wanted from Laika so I decided to steal their trick – use a tug toy. It’s used often by those that train and work with dogs in the military, agility, and police work as positive reinforcement.

I was lucky with Laika because she had a high play drive already. I didn’t have to prove how awesome a game of tug was – she already knew. Once I started dangling a tug toy rather than a piece of kibble her eyes stayed on me, not on the neighbors kitty. Holding that tug worked at the park, near horses, and while passing small dogs on the trail. *A few small dogs remain too much of a distraction but we’ve made a lot of progress.

Some dogs would much rather play than have a bite of kibble. I rarely leave the house these days without a tug toy – it’s become my favorite training tool.

Have you played tug today?

Dogs thrive off of interactive play so tug can be extremely rewarding. It’s a great way to burn off energy, tap into natural canine instincts, relieve stress, and strengthen the bond you have with your dog. If my dog had her way everything would revolve around tug.

Dogs are the only mammal besides us humans that play well into adulthood. Therefore using play as a reward just seems to natural – and super fun.

We suggest that the domestic dog’s characteristic playfulness in social contexts is an adaptive trait, selected during domestication to facilitate both training for specific purposes, and the formation of emotionally-based bonds between dog and owner. Play frequency and form may therefore be an indicator of the quality of dog-owner relationships. – John Bradshaw, Behavioral Processes – New Directions in Canine Behavior

My Dog Is Always Up For a Game of Tug

Not all dogs are going to be as highly play driven as Laika, but it’s definitely worth exploring. Instead of using food as a training reward switch it up and use their favorite toy. It makes training more exciting, fun, and versatile for dog and owner alike.

If your dog isn’t too keen on play I’d suggest reading these great articles on how to increase your dogs play drive & do you have a dog that doesn’t like to play? Both have plenty of great strategies to help make your dog more interested in playing.

Not all dogs do automatically like a game of tug. It’s a reward that needs to be developed in many dogs. Our opinion is that it always is worth to teach the dog to play if you want to get the most out of the dog you have. The dog might not have to enjoy tugging as much as food, but he should play with high intensity when we present a toy. 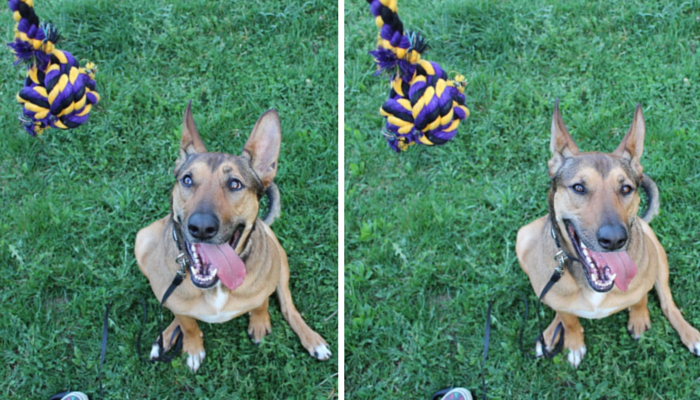 Laika with her Ava tug & toss toy. Does your dog know the rules of tug?

We have a lot of tug toys. We’ve got ones with handles, ones with tennis balls, ones made from fleece, and some that are over 2 feet long. My personal favorite is the simple Ava tug and toss toy from Damien’s Best Dog Toys.

It’s made from really soft cotton rope so your hands won’t suffer while holding on as a 75 pound Shepherd mix tries to drag you across your yard. It’s small enough to easily carry around on walks and it’s extremely durable – though I always put it away when we’re not training or playing. Dogs will rip up rope toys given enough time.

Did I mention how soft it is?

While working with North Country Animal League’s dog trainer I became aware of how important play time and stimulating activities were to the health and happiness of the dogs that stayed at the shelter. As I spent more time at the shelter, I found out that shelters depend on donations from the public in order to provide day to day services such as food and vet care and enrichment items such as toys for the animals are often overlooked. – Mark Scott, Damien’s Best Dog Toys

There are a lot of tug toys to choose from – and your dog will most likely adore any of them. But for me I always reach for our Ava tug because it’s super soft and I love supporting such a great initiative. Being able to help bring the joy of interactive games and play to shelter pets by purchasing an item I already love – yeah I’m sold. One other awesome fact; they offer free shipping on all dog toys.

Damien’s Best Dog Toys are cotton rope toys handcrafted in Vermont. These toys were developed as a way to support local humane societies. Most animal shelters depend on donations from the public in order to provide day to day services such as food and vet care, and often enrichment items such as toys for the animals are overlooked. By purchasing a handmade rope toy from Damien’s Best Dog Toys you are supporting this initiative to donate dog and cat toys to animal welfare organizations. – Damien’s Best Dog Toys

So next time you’re struggling with training grab a soft tug toy and make that training fun.

I have not received any compensation or free toys for this article – I just love soft tug toys. 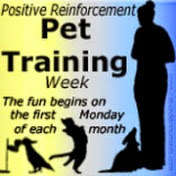 5 Simple Tips For Potty Training Your Puppy
5 Of Our Training Goals For the Fall
It's Laika's Gotcha Day, Let's Celebrate With Carrots
13 Simple Steps to Improve Your Dogs Recall
414 shares
« Roundup #12 – Our Favorite Dog Articles of the Week
Every Pet Store Puppy Has a Mother »