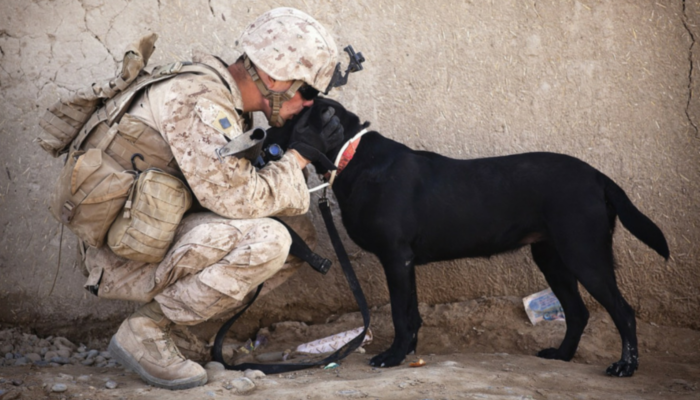 UPDATED – Originally published in June of 2014. Many new updates including the addition of Purdue Universities clinical research trials. I hope to shed some light on why there’s confusion regarding the rights of PTSD service dogs – and why they’re not currently considered service animals by the Department of Veterans Affairs.

The VA doesn’t currently consider PTSD dogs to be service animals because they say hasn’t been enough clinical research to support their usefulness.

Service animals under VA regulations are animals that are specifically trained to help a veteran with an ongoing physical disability; they cover veterinary services for these animals.

Estimates have shown between about 20% of veterans returning home to civilian life today are likely to develop PTSD. Demand for PTSD service dogs is growing, yet many vets have trouble finding the support needed to get one.

The nationwide average expense for training a service dog is between $30,000 & $40,000, a lot of fundraising usually helps someone get paired with an animal. Since PTSD dogs aren’t covered veterans often rely on fundraisers & help from others to come up with the money needed to get their own service dog.

Legal Definition of a Service Animal

There is a lot of confusion in regards to service animals vs emotional support animals. The legal definition of a service animal by the U.S. Department of Justice:

The ADA defines a service animal as any guide dog, signal dog, or other animal individually trained to provide assistance to an individual with a disability. If they meet this definition, animals are considered service animals under the ADA regardless of whether they have been licensed or certified by a state or local government.

Service animals are working animals, not pets. The work that a service dog has been trained to provide must be directly related to the person’s disability. Under these guidelines dogs whose sole function is to provide comfort or emotional support do not qualify as service animals under the ADA.

Some State and local laws also define service animal more broadly than the ADA does. Information about such laws can be obtained from your State attorney general’s office.

Emotional support animals (ESA) are companion animals that offer therapeutic support. The skills & tasks that ESAs provide can be just as wide ranging of those for a service animal but they aren’t necessarily provided the same protections.

The Americans with Disabilities Act allows people with disabilities to bring their service animal to public places. These protections are only extended to animals that have been individually trained to perform tasks for the benefit of an individual with a disability. ESAs aren’t always trained specifically for one individuals disability therefore they are not afforded the same protections under the ADA.

This issue tends to pop up in the news quite frequently and it’s quite clear that each state being able to govern laws regarding accessibility of a service animal/ESA is going to cause a lot of confusion and grief.As far as PTSD dogs go federally they are considered to be service animals, but some states & laws will only afford protection to animals that provide specific tasks for a disability and they need to be certified.

Many vets who seek a PTSD dogs first do their research online to find local resources to connect with a potential dog; they don’t necessarily know if said dog will have the certifications needed to qualify as a true service animal. 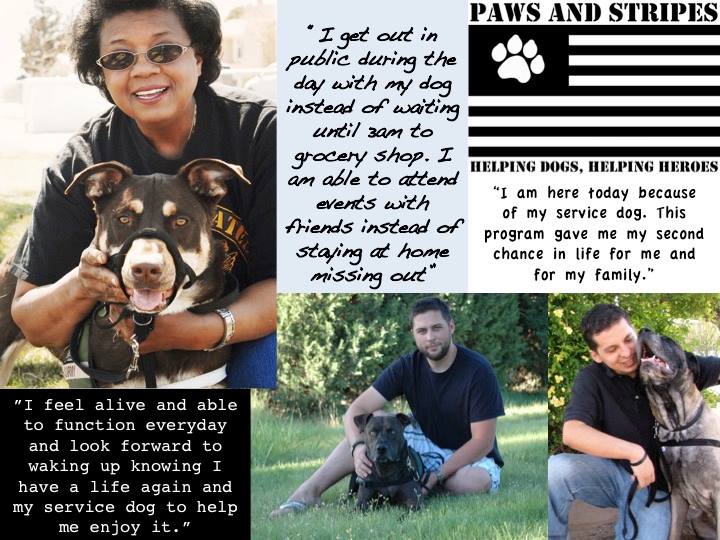 How Do We Define PTSD Service Dogs?

PTSD service dogs are psychiatric service dogs, they are trained to perform any number of disability mitigating tasks including:

Under these guidelines they are covered under the ADA as service animals, but there’s still a lot of confusion surrounding them. People who are not aware that these dogs have been trained to do specific tasks some people assume they’re emotional support animals.

Commencing not later than 120 days after the date of the enactment of the Act, the Secretary of Veterans Affairs shall carry out a pilot program for the purpose of assessing the effectiveness of addressing post-deployment mental health and post-traumatic stress disorder symptoms through a therapeutic medium of training service dogs for veterans with disabilities. – Veterans Dog Training Act

While all of this is good news for the possible future of funding PTSD service dogs it’s not going to come quickly, and until then there’s still going to be a lot of confusion about how to define PTSD service dogs.

The VA study isn’t expected to finish for another year or two, it’s currently estimated to be completed in 2017. The study was mandated by Congress back in 2010 but the study has since been halted two times – once in 2010 and again in 2012.

Service dogs for PTSD and other mental health problems are a topic of keen interest, and the study was mandated by Congress in 2010. VA launched a pilot the next year, but the study was halted after two service dogs bit children in Veterans’ homes. Further problems with the health and training of some of the dogs led to a second suspension of the study in 2012. – VA Restarting Study on Service Dogs & PTSD

For now veterans looking for service dogs are going to have to reach out to the private sector for support & continue to face confusion regarding the status of their service dogs.

You can help by spreading the word about how much of a difference a PTSD service dog makes to veterans. It’s not always easy adjusting to civilian life after serving – providing veterans with service dogs is one simple way we can help. Show your support for organizations that help provide PTSD service dogs to veterans, share the heartwarming stories of veterans and their service dogs.

There may not be enough clinical research to show the effectiveness of such service dogs, but there’s more than enough proof when you see the awesome bond that exists between a veteran and his service dog for yourself – wouldn’t you agree? Our veterans deserve our support, we can show ours by helping to support organizations that help wounded veterans, and by sharing their stories.