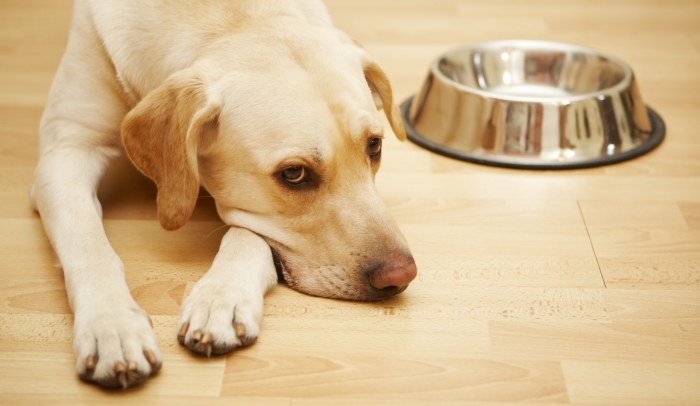 Why Do Dogs Guard Their Food? 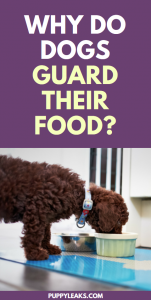 Does your dog get defensive when you approach his food? Does he stiffen up, growl or perhaps even snap at you? That behavior is called resource guarding, and when it comes to resources food is the most common trigger.

It’s a problem that many dog owners face — myself included. Here’s why dogs guard their food, and some resources to help you manage the behavior.

Why Do Dogs Guard Their Food?

Guarding food is a fear based behavior that some dogs exhibit. While it’s not a behavior that’s desirable in the home it is important to remember that it is a normal, instinctual behavior for dogs. Resource guarding is a behavior that helps animals out in the wild — those that successfully guard their food are the ones more likely to survive.

Guarding food and highly coveted objects is something dogs have been doing for ages. Wolves wouldn’t be nearly as successful if they didn’t have the ability to defend their resources. In a natural environment these adaptive traits give dogs an advantage. – 5 Myths About Resource Guarding

Resource guarding in dogs ranges from mild to severe. In mild cases a dog might get slightly stiff as you approach his food bowl, and in more severe cases they might growl and/or bite when approached. If your dog is guarding his food it’s important to remember that it does not mean your dog is overly aggressive, nor does it that your dog is trying to be more dominant than you. It’s a fear based behavior that dogs use to keep others from taking away their food or possessions.

The good news is that resource guarding can be managed, but the bad news is that no one knows exactly why some dogs guard their food and others don’t.

What we do know is that dogs that guard their food feel insecure, and they’re guarding it to keep others from taking it away. Does that mean that you somehow taught your dog to be nervous around food? Not necessarily. Food guarding (also called resource guarding) is thought to be caused by both genetics & environment, what we refer to as nature & nurture.

Here’s a look at some of the common theories as to why dogs guard their food.

Puppies May Learn Guarding by Competing With Littermates

Some experts believe that food guarding begins very young, when puppies have to compete for limited supplies of food such as their mothers milk or food from a bowl. The puppies that eat the most grow the quickest, and the theory is that those pups are being rewarded for eating as much food as they can therefore establishing a history of being rewarded for monopolizing the food for themselves.

Resource guarding may arise as a result from insecurity from competing for food or being deprived of resources, but it’s important to note that some dogs who exhibit guarding have no history of neglect, abuse or deprivation.

A dog might be genetically inclined to guard, but depending how much he is allowed to practice the behavior throughout his life also contributes to the severityof the problem. – Resource Guarding, Whole Dog Journal 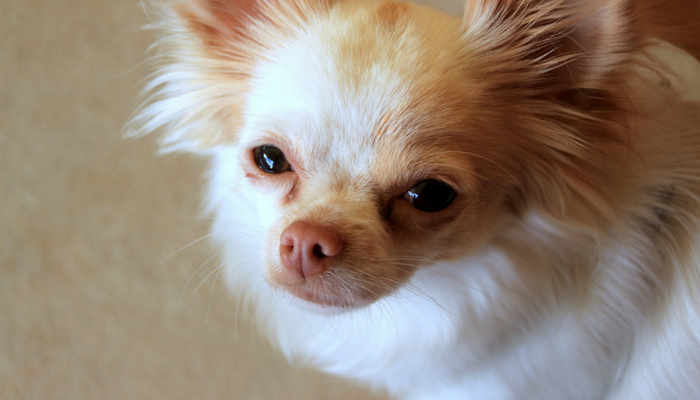 When dealing with a dog that guards their food keep in mind that your dog is not trying to be overly aggressive or dominate you. Guarding is a fear based behavior that dogs use to prevent something valuable from being taken away. For more information on how to help manage your dogs guarding check out 5 ways you can hep reduce resource guarding.

The Environment May Cause Food Guarding

Dogs in shelters exhibit a higher than usual rate of food guarding (as much as 25%). But keep in mind that the shelter environment is an extremely stressful one, and the assessment that dogs get to rate their aggression with food (sticking a rubber hand in their food bowl) might not correlate to how a dog would react in a normal environment. Dogs in shelters might not know when and if their next meal is coming, so their anxiety about it increases.

Fear is the underlying cause of most forms of canine aggression. It is triggered by a stimulus that is threatening to the dog. When the aggression is a direct response to a challenge or confrontation, it might be referred to as defensive aggression. – Merck Veterinary Manual

Many shelters have developed feeding programs that help decrease the amount of food guarding seen in the shelter by free-feeding their dogs, giving them access to a full food bowl at all times and/or making sure they have access to food on a consistent basis.

So while it’s true that many dogs guard their food while living in a shelter environment, studies have shown that the behavior is no longer observed after dogs are placed into homes. In most instances dogs placed into homes no longer show food guarding after as little as 3 weeks, and many shelters report success rates of over 90%.

Because there are much higher instances of reported guarding in shelters it’s easy to see how much of an impact environment can play in a dogs behavior.

Your dogs genes can affect their behaviors, but unfortunately when it comes to guarding there’s a serious lack of research. We know that a Border Collie’s genes are responsible for his natural herding instinct, and that livestock guardians have an inclination to guard their flock against predators. But when it comes to food guarding we don’t have definitive studies that can point to certain breeds being more prone to the behavior.

Researchers have tried to determine what genes may be responsible for increased aggression in dogs, but so far there’s no breed-specific results worth noting. When it comes to resource guarding in particular there haven’t been any definitive studies on the role of genetics.

Based on the little research we have and my own experiences with hundreds of RG cases (1,000’s?), that there is a genetic component to the behavior. I’ve worked with litters of 11 dogs in which the biggest and strongest (and first to get to the nipple) pup became the RG dog very early in life. On the other hand, there is a great deal of research on a variety of species that reminds us that experience plays a significant role in “winning” and “losing” competitions. – Resource Guarding: Treatment & Prevention, Patricia Mcconnell

Unfortunately we don’t know the exact reason why some dogs guard their food and others don’t, though there are some pretty intriguing theories. What we do know is that dogs who guard their food aren’t bad, defective or aggressive — they’re acting naturally, though admittedly it’s an issue that can and should be addressed.

If your dog guards his food don’t be afraid to seek out a professional trainer for help. I’ve also included some great resources below to help you understand the behavior and come up with a plan to help modify the behavior.

Help & Resources for Dogs That Guard Their Food