You are here: Home / Dog Training / 5 Myths About Resource Guarding 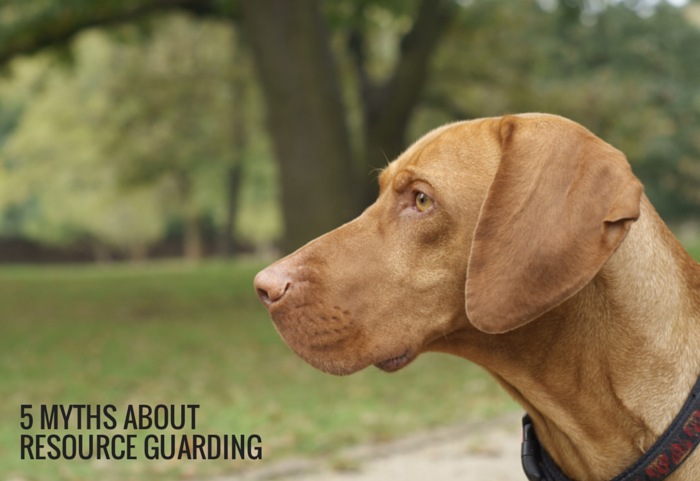 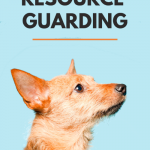 I cannot overstate how much help Jean Donaldson’s book Mine! A Practical Guide to Resource Guarding has been when it comes to managing my own dog’s resource guarding. It’s a book I highly recommend to anyone that’s dealing with guarding issues.

The best starting point for anyone managing guarding issues with their dog is understanding the behavior itself. Dismissing previously held beliefs and ideas about resource guarding allowed me start training my dog, rather than analyzing the situation. Once you understand the behavior you can manage it with a fresh perspective — one with more optimism and a lot less frustration.

What is resource guarding anyway? Resource guarding is when your dog controls access to his possessions by displaying defensive body language or aggressive behavior. Dogs most often tend to guard their food (it’s often just called food aggression), but their humans, toys, beds, and their favorite spot on the couch can also become targets.

Does your dog growl or snap if you approach his food? That’s classic resource guarding. Does he actively try to keep other dogs away from your when you’re at the park? That’s not protection — it’s resource guarding. Your dog has decided that you are his and he’s going to protect his resource – you – from other competitors.

One of the first steps I took in learning to manage my dog’s resource guarding was picking up Jean Donaldson’s excellent book Mine! A Practical Guide to Resource Guarding.

As I began reading I realized all my previously held beliefs about my dogs behavior were wrong. She excellently lays out 5 myths about resource guarding that helps us understand that it’s not only a normal behavior, but that it can be managed.

The Dangers of Misunderstanding Resource Guarding

The danger in these widespread myths about resource guarding is that it can cause more harm than good. When you punish a dog for guarding his resources you’re not helping the underlying issue – trust. Instead you’re creating a dog that is more fearful and less confident, which can lead to more problems with aggression later on.

Resource guarding isn’t an “easy” behavior to fix, but it is manageable. One of the first steps is understanding that not everything you’ve heard about the behaviors is true.

The first common misconception about resource guarding is that the behavior itself is abnormal. Is it an undesirable behavior? Yes, but it’s not abnormal or unusual.

Guarding food and highly coveted objects is something dogs have been doing for ages. Wolves wouldn’t be nearly as successful if they didn’t have the ability to defend their resources. In a natural environment these adaptive traits give dogs an advantage.

If your dog is a resource guarder and had to suddenly fend for himself tomorrow he’d have a natural advantage over non-guarders. Of course this isn’t to say that resource guarding is a desired behavior in a home where they’re given food and objects freely – it’s just pointing out that guarding is normal.

The sad fact is that although there’s been a few studies done on the probability of dogs exhibiting resource guarding no one actually knows why some dogs have it and some don’t. It’s been seen in all breeds and in all ages.

Genetic programming may indeed make certain behaviors easier to learn for some dogs but there is no clear correlation between how much a behavior is thought to be genetic and its susceptibility to behavior modification.

When asking yourself whether it’s nature or nurture the answer is going to be both. So we can’t say that “it’s all how they’re raised” or “it’s because of his breed.” There isn’t enough good data to support either claim.

For further reading on the possibility of resource guarding being genetically driven be sure to check out Patricia Mcconnell’s great article “Resource Guarding: Treatment and Prevention” where she shares her own experiences and observations about working with the behavior.

Myth 3. It Can Be Cured by Making Resources Abundant

The logic based approach of giving a dog so many resources he couldn’t possibly need to guard makes sense in the human mind, but unfortunately dog’s don’t see it this way.

Before I began actively managing my dog’s resource guarding she had access to all of her toys at any given time. Instead of giving her comfort and less stress it made her focus more on hiding and protecting her “possessions” at any given time.

Myth 4. Guarding Is Symptom of a Dominant Dog

So many previously held beliefs about dogs have relied on using social hierarchy models to explain dog behavior. We’ve all heard about dominance theory and how important it is to be a dominant leader for your dog.

Unfortunately resource guarding as well as many other common behavioral problems don’t respond well to dominance or punishment based training. In most cases they can make it much worse.

Resource guarding is commonly seen in dogs who lack confidence. It is a fear based behavior, not one that’s displayed by dogs trying to be overly assertive or dominant.

Myth 5. It’s a Result of Spoiling Your Dog

Resource guarding can crop up in any dog regardless of age, breed, or history. Dogs with varying degrees of obedience training can develop guarding behaviors – it’s an equal opportunity behavior problem.

There is no evidence to suggest that dogs with poor manners or ones that lack simple obedience training are more likely to develop guarding behaviors. 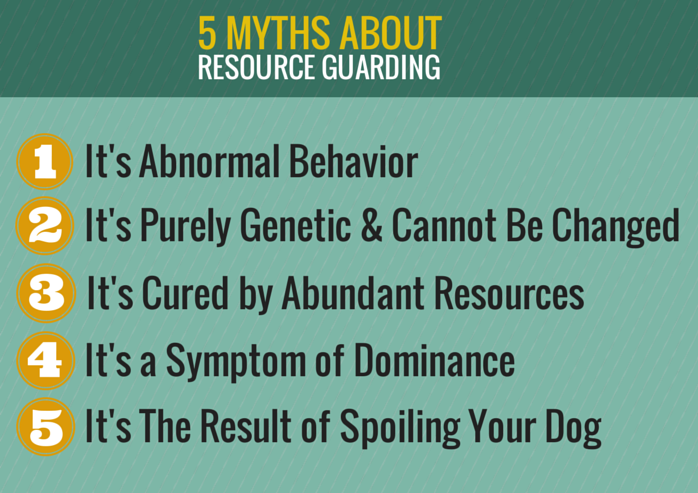 If your dog is a resource guarder keep in mind that he’s exhibiting fear and stress; he’s not trying to dominate you. With patience, consistency, & the proper training approach you can manage your dogs guarding.

You Can Manage Resource Guarding

With the proper training approaches and techniques you can learn to manage the behavior. Desensitization and counter conditioning work very well on dogs that exhibit resource guarding. Don’t get discouraged when you don’t see results right away – it is a very long process.

Just getting near my dogs food bowl without her growling took months. It takes a lot of patience and consistency but it’s worth it for your sake and for your dogs well being.

Dogs that guard items feel threatened and stressed. It’s not a great feeling to know your dog feels threatened by your presence around his “possessions” but once I realized my dog was even more stressed out than I was I knew I had to commit to making things better for the both of us.