You are here: Home / Dog Training / I Encouraged Most of My Dogs Bad Habits 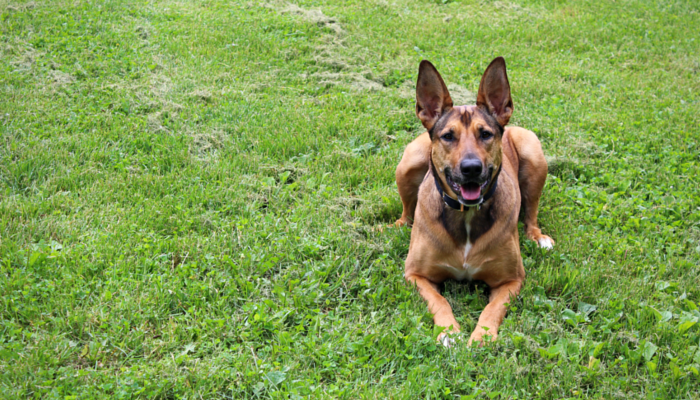 I Encouraged Most of My Dogs Bad Habits

Confession time: I’ve created a monster. A whining, barking, begging, won’t get off the bed sort of monster that follows me everywhere. And do you know what the worst part is? I don’t mind at all.

My Dogs Bad Habits – These Are Definitely My Fault

Dogs have a tendency to pick up a few bad habits – and Laika is no exception. Instead of blaming the dog I’m going to fess up and admit that these bad habits were created by me. When these habits started I could have quit laughing and intervened, but I didn’t.

Laika is a total velcro dog and I made it worse. I’ve never really had a super affectionate dog before, so when Laika started following me around I was flattered. Every time I turned around she was there – and I’d pet her and tell her how sweet she was. I was basically saying “Please follow me around everywhere; I will make sure you are rewarded each time.”

She still begs for food because well… sometimes I give in. I know better, I really do, but sometimes it’s hard to resist giving her a carrot or two while I prep dinner. To her credit she’s not the up-in-your-face type of beggar – she sits in her chair at the kitchen bar and stares – with a bit of drooling from time to time. 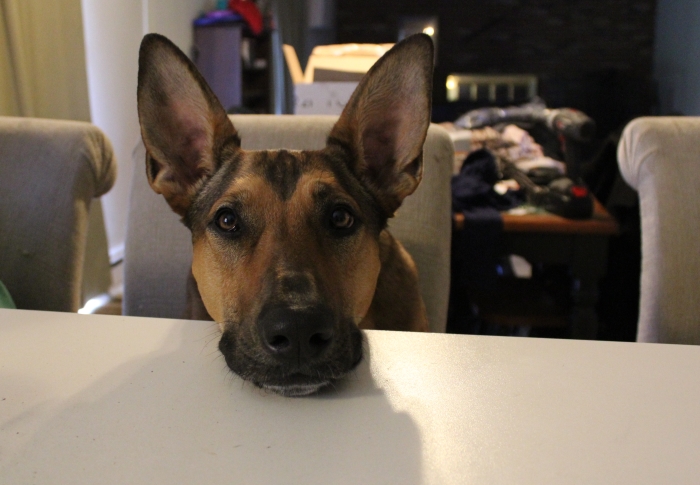 Laika just waiting for me to drop food, sans drool.

She barks at me when she’s impatient. When we’re playing fetch she’ll bark at if I don’t throw it again right away. She also barks when I don’t blow bubbles fast enough. Finding it amusing I used to laugh every time and just ended up encouraging her to bark more. If I tell her “quiet” she’ll just silently bark instead. And for her those silent barks look and sound a lot like snapping.

She refuses to get off of the bed. When she was younger she got into the habit of crawling under the bed and playfully biting if when I tried to remove her. This game of “I’m gonna get you” certainly riled her up, and I’d be lying if I didn’t find it fun as well. When she grew too large to fit under the bed our little game moved to on top of the the bed instead.

She whines when you stop petting her – but that one’s my boyfriends fault. She started this behavior on her own but my boyfriend absolutely encouraged it. He’ll deny it to this day but I remember telling him years ago “you’re just making her whine more.” Every time he stops petting her she lets out a sigh and then the whining begins.

I made the mistake of showing this to my boyfriend so really it’s my fault anyway:

Have I Created a Monster?

It’s easy to blame the dog in many situations – but these are definitely my fault. I not only let these habits continue – I actively encouraged them. Do I mind? Not really. I know these habits might be considered “bad” to some; but I don’t mind at all.

Am I immature for encouraging these bad habits? Quite possibly. But whether I’m immature or not they still make me laugh; and comic relief is always welcome. And who doesn’t love a game of “I’m gonna get you” anyway?

I don’t have any bad habits. They might be bad habits for other people, but they’re all right for me. – Eubie Blake

A few of Laika’s behaviors are serious – resource guarding and reactivity are much more than just another bad habit – and they’re far from being harmless. I choose to focus on correcting those behaviors and let the seemingly harmless habits slide.

How about you – do you make the distinction between bad habits vs bad behaviors? How many bad habits or funny quirks does your dog have? And be honest – how many of them have you encouraged over the years?