You are here: Home / Dog Training / 3 Easy Ways to Stop Your Dog From Begging

3 Easy Ways to Stop Your Dog From Begging 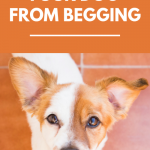 Begging comes naturally to our dog’s, and they’re so good at it that we often give in. I think we’ve all said things like “Oh, look he’s starving” and handed our dog a bite of our dinner. And without realizing it we’ve just reinforced their behavior even more.

I’m not going to lie — I find it hard to resist those puppy dog eyes. But if you really want to teach your dog not to beg you’re going to have to learn to stop giving in.

Why Do Dogs Beg?

To put it simply dogs beg because they want food. Begging is a natural behavior to dogs, so it takes a lot of consistency to undo that behavior if you’ve been reinforcing it.

Wolves began scavenging for human food many years ago. They started hanging around humans for scraps, and the tamer the wolf the more they were rewarded with extra bits of food. Begging isn’t rude or weird to your dog; it’s instinctive.

Domesticated dogs are hard wired to seek out opportunities to obtain food from humans. And because they’re observant they quickly learn that begging produces results. It is one of the most common complaints of pet owners, but there is hope. You can keep your dog away from your food while your eating, you just have to be consistent. 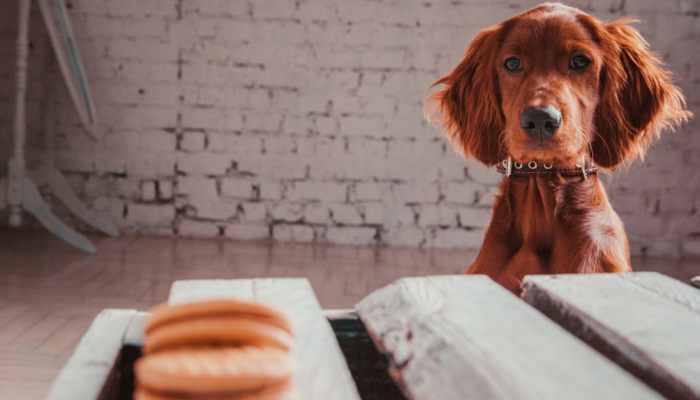 If you want to keep your dog from begging the first thing you need to do is make it a strict rule.

How to Stop Your Dog From Begging

We’re guilty of reinforcing our dog’s bad behaviors. and since our dogs know us so well they’re good at learning how to get what they want. Dogs beg more when we’re looking at them; they know it works. Those big puppy dog eyes and all that whining – it works really well on us humans.

The first step when teaching your dog not to beg is to make a promise to yourself: stop giving in. Every time you give your dog a treat from the table it’s teaching them that begging works. It might not work every day, but our dogs have good memories; they’ll keep trying if they know it worked last week.

It’s not fair to expect good behavior from our dogs if we ourselves don’t remain consistent. If you want your dog to stop begging you have to ensure that you’re not giving him mixed signals. You can’t scold him for begging while company is over and give in the next day. You have to be consistent and fair.

Training ourselves to be consistent is usually the hardest part, the rest is fairly simple. Here’s 3 ways to stop your dog from begging.

If your dog already has the habit of begging for food you need to completely ignore the behavior. If he receives a scrap from you one single time he knows that his efforts might pay off next time.

It sounds simple enough, but being consistent can be tough. Don’t look at your dog while be begs. Don’t speak to him. Don’t shoo him away. Just ignore him.

He will probably fuss and protest if he’s a prolific beggar, but you are going to have to learn to ignore it. Your dog will eventually learn that “hey, I guess that’s not going to work anymore.”

Don’t equate food with love. Your dog is not starving. You feed him well every morning and evening. More than 50% of American dogs are overweight, your dog doesn’t need any extras. If you still feel bad just remember – he’s manipulating you.

Dog’s have evolved those big sad eyes and floppy ears for just that reason, to manipulate you into caring for them. They’ve evolved more puppy like features and tend to share a lot of characteristics of wolf puppies rather than adult wolves.

It’s not exactly their fault that they’re so darn cute & easy to care for, but remember – your dog is not starving and all those extra bits of food can shave years off his life. 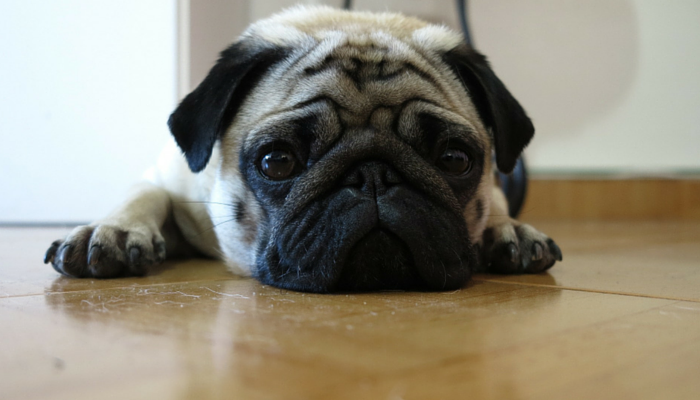 By ignoring your dog when he begs he’ll eventually learn that it’s not going to work anymore.

2. Separate Your Dog From the Dinner Table

One of the simplest ways to stop your for from begging is by preventing the behavior to begin with. You can do this by separating your dog from the dinner table.

You can teach your dog to lay down in another room while you eat, or you use a baby gate to keep them in a separate room. If your dog is already a beggar remember that his behavior is probably going to be quite resistant for a little bit before it gets better, but the consistency will eventually pay off.

Have your dog lay down in his bed or wherever you’ve chosen for him. Praise him when he lays down and give him some treats in this spot.

Depending on his stay command you might have to work at this for awhile before he’s consistently staying in his new spot. After you’ve eaten go over to him and give him lots of praise, give him treats. Let him know the behavior of sitting calmly while the family eats is what’s going to yield the best reward.

If you don’t think your dog is going to be able to stay for any amount of time or you don’t have a decent stay command mastered you can choose to separate him with a barrier. Baby gates are a common choice.

3. Redirect His Attention While You Eat

If you don’t want your dog to stay completely separated from you while you eat you can redirect his attention to some food, toys, or treats of his own. Give your dog something else to focus on while you eat. Give him one of his favorite bully sticks, or stuff some peanut butter inside of a Kong.

Whatever floats his boat (stuffed Kongs, chew toys such as Benebones) is what you’re going to use for distraction. Ignore him if he gets up from his treat to beg. He will probably do this for awhile if he’s accustomed to begging.

As long as you don’t give in and feed him from the table anymore he will eventually learn that his begging skills aren’t going to pay off anymore.

If you’re consistent and decide to stick with it begging can be quite easy to correct. It just takes patience and consistency. You need the whole family involved; if dad decides he’s not going to play along and gives in you are not going to be successful.

You can’t give in, no matter how cute he is or what sounds he’s making, it will put you back to square one.

Does Your Dog Beg for Food?

Does your dog beg for food? What method worked for you when it came to stopping the behavior? Let me know in the comments below.