You are here: Home / Dog Training / To Crate or Not to Crate? The Basics of Crate Training 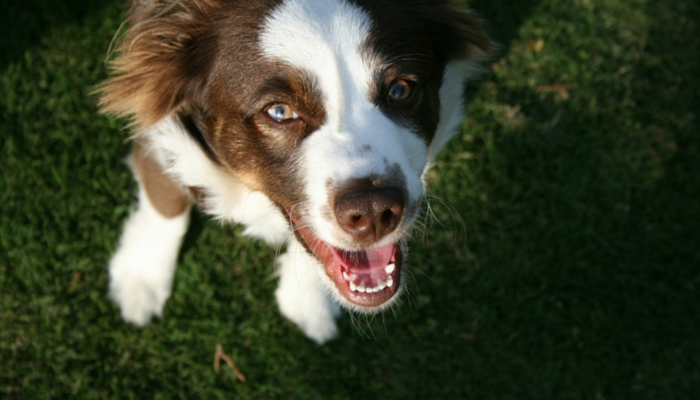 To Crate or Not to Crate? The Basics of Crate Training

Whenever a coworker gets a new puppy the dreaded debate over crate training begins. Some people don’t like the idea of leaving a dog inside a crate for hours on end, and some think of it as cruel.

I have to admit before I crate trained my previous dog Carter I wasn’t in love with the idea of crate training either. It didn’t seem natural to me, locking my dog away in a cage while I went off to work.

But after I tried it for a week I was sold. I no longer had to worry about what Carter might be getting into while I was gone, and to my surprise he didn’t mind it at all. With a proper introduction to the crate it can become a safe and welcome place for them to rest when you’re away.

In this article we’ll go over the basics of crate training, including the benefits, limits, and what to look for when choosing a crate.

The Basics of Crate Training Your Dog

Crate training is the process of teaching your dog to go into their crate when you’re away. When done correctly the crate itself becomes a safe and welcome place for your dog. And if you have a new puppy the crate can give you some peace of mind while you’re away, since you won’t have to worry about all the things they could be getting into.

But as with anything there are limits, especially when it comes to crates aiding in the house breaking process. Puppies can’t hold their bladders for 8 hours at a time, so until your pup gets a bit older and can hold it it’s best to have someone come over during the day to let them out for a pee break.

With the right management though, a crate can make training a lot safer & easier. Here are some crate training basics to help your dogs introduction to the crate go smoothly.

The Size of the Crate Matters

When it comes to the basics of crate training the first step is choosing the correct crate for your dog. You want the crate to feel cozy, but not tiny. Your dog should be able to stand up, lie down and rearrange himself comfortably.

If you have a puppy that is going to be growing a lot you can use a divider and install it inside of an adult sized crate. Solid plastic crates are great for trips and can work in your home, especially if you have a dog that tends to be over stimulated by visuals. If you choose wire crate you can make it more cozy by using blankets on the surface and hanging some over the side.

Proper Introduction to the Crate

The introduction to the crate is important. Don’t force your new dog or puppy into the crate if they’re not comfortable or curious enough to check it out themselves. Coax them, make it fun.  Place some treats inside to accustom them to entering, praise them when they go inside. You can also play some games in or near the crate to get them used to whole idea. You want your dog to understand that it’s not just a big scary cage; it’s a nice place to hang out where nice things happen. 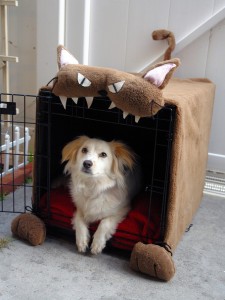 If you have a puppy it will probably be easier to coax him inside with a toy – if you have an adult dog whose never seen a crate before it’s going to be more challenging.  You might want to consider feeding him his meals inside the crate for awhile.  You’ll need to gradually introduce an adult dog to this idea, slowly putting the meals further into the crate – when he’s feeling more comfortable you can also practice closing the crate door while he’s inside.

Incorporate going into the crate as a command, give him a treat every time he listens.  Keep it positive, don’t use the crate for any kind of punishment.  If your dog panics or looks anxious when inside the crate be patient, don’t leave him in there and assume he’s going to settle down.  Keep practicing crate games and he should eventually start to remain calm around it.

Never Use The Crate As Punishment

While it might be easy to just put your dog in his crate for punishment it’s a terrible idea. You don’t want your dog to associate the crate with anything negative. The purpose of the crate is to be a safe place for your dog, not a tool for punishment.

Making Sure The Crate is Safe

The crate should be a safe place for your dog to be when you’re away. Make sure there are no sharp edges, and remember to remove your dogs collar when he’s going to be staying inside of it. You don’t want any possibility of your dog getting caught while inside the crate.

If you have a puppy he’s going to whine at night when you put him inside.  As long as the dog isn’t extremely anxious and he’s been outside recently you can ignore his whines.  Puppies whine when they’re adjusting to a new environment, he’d probably be whining if you left him out in the hallway too.  They’re adjusting to a completely new life and new schedule with unfamiliar faces – they will take a bit of time to settle down.

Getting Your Dog Used to the Crate

Toss some treats or toys in their crate to get them used to entering on their own. If they get rewarded for going in the crate they’ll start to associate the crate with positive things.

Depending on your dog this could take a few hours to a few weeks. The age, temperament, and any previous experiences they’ve had with crates will make a big difference. With enough patience and consistency you can teach your dog that their crate is where good things happen.

With Consistency The Crate Can Become Their Safe Place

Most dogs who’ve been property crate trained come to see the crate as their safe place. My dog goes inside of hers when shes ready for bed, we don’t even ask anymore. It made house training easier and I was relaxed at working not having to wonder what my puppy was getting into.

Don’t leave your dog in the crate too long. A dog that’s crated day and night doesn’t get enough exercise or human interaction and can become depressed or anxious. You may have to change your schedule, hire a pet sitter, or take your dog to a doggie daycare facility to reduce the amount of time he must spend in his crate every day. – HSUS

To get a dog used to being in the crate for periods of time you should give them something to keep them busy. Kong toys stuffed with Peanut Butter is a common suggestion, but there’s also plenty of other treats you can stuff in a Kong.

How Long Can I Leave My Puppy in His Crate?

Puppies can’t hold their bladders for 8 hours at a time. And the smaller the dog the smaller the bladder; a Lab puppy will be able to hold it longer than a Chihuahua. According to the ASPCA the general guidelines for leaving your puppy in his crate are:

During this time consider having someone come home at lunch to let out your puppy, or you can hire a dog sitter/walker to help.

Puppies, especially, should not be left in a crate for long periods of time (more than two hours). It is important that puppies not be neglected and forced to break their instinctive aversion to soiling their sleeping area. – Best Friends Animal Society

Crate Training Made My Life Easier

As long as your dog is relaxed and/or busy when you leave them in the crate they’ll probably just settle down and nap til you return. I know plenty of people that have set up camera to make sure their dog remains calm while their away – that’s certainly not a bad idea if you have the equipment.

While it might not be something everyone is willing to try crate training certainly made my life a lot easier. I was able to go to work without wondering what sort of disaster I would come home to, and I didn’t have to worry about her getting into anything dangerous. Years later she still doesn’t mind it at all; at night she still chooses to sleep in her crate, so now we just leave the door open at all times.