You are here: Home / Roundups / Roundup 81: Favorite Dog Articles & Videos of the Week 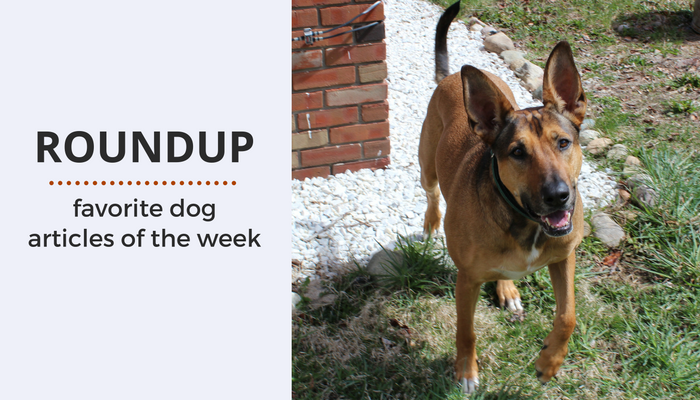 One small victory this week for dog lovers everywhere who have voiced concerns over Montreal’s Pit Bull ban. Earlier this week the judge extended the suspension of the restrictions pending the final outcome of the SPCA’s challenge.

Restrictions aimed at pit bull-type dogs, including a prohibition on adopting them and a requirement that they be muzzled when outdoors, will not be enforced until the SPCA’s challenge is heard by the courts and a final decision is rendered. – CBC

While this doesn’t mean the battle is over it is an important first step. Here’s to the hope that one day we’ll stop deeming dogs dangerous based on looks alone.

Videos of Dogs Going Face-to-Face With Dogs Set Bad Examples | Psychology Today
After scouring the internet for dog videos every week I couldn’t agree with this more. I cringe every time I see videos of kids playing with dogs while they’re eating, riding on their back, kicking at them or pulling at their face. I get it, some dogs are pretty laid back, but that doesn’t mean there is an infinite amount of things any given dog will tolerate.

Beloved Pets – Links to Our Past & Hearts Forever | Nancy’s Point
Why it’s OK ( and normal for many of us ) to feel completely torn up after losing a beloved pet, even if it’s not the “norm” by societal standards. Grief is something we don’t talk about openly very often, but just knowing that you’re not alone can be comfort in itself. And trust me – when it comes to losing a pet many of us grieve for a very long time.

People Are Shocked to Discover Where Pet Store Puppies Come From | The Dodo
Is there a disconnect between how much us ‘dog people’ know about pet stores & puppy mills compared to what the general public knows? If this report is accurate it’s clear that there’s still a lot of misinformation out there when it comes to the fact that 99% of pet store puppies come from puppy mills.

Does The Design of Veterinary Clinics Have Psychological Impacts For Pets? | Mattie Dog
If you’ve been to a few vets over the years you’ve probably noticed how widely the environment itself differs from clinic to clinic. Here’s a look at the ‘fear-free’ movement taking hold among veterinarians whose goal is to reduce the stress of vet visits.

New video from Hope for Paws.

How had I not seen this before?