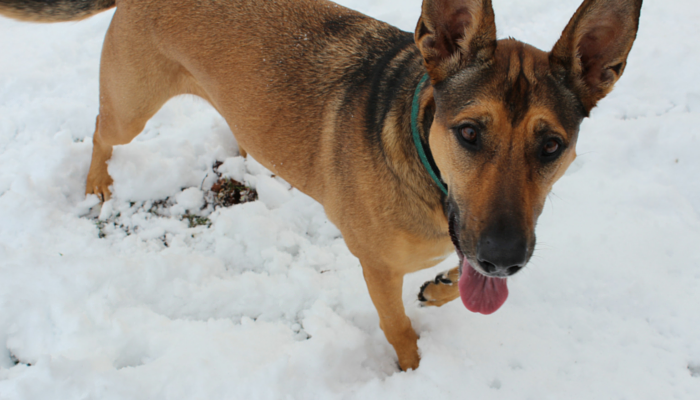 Laika’s dreams have come true – we finally got a shitton of snow. Well compared to normal it might not be much, but considering what we’ve had it’s plenty and we’re both pretty thrilled.

She’s also decided that I’m too slow at shoveling. She follows me around whining, just waiting for me to get to the end of the driveway when I toss it aside for hew to catch..dogs are weird. 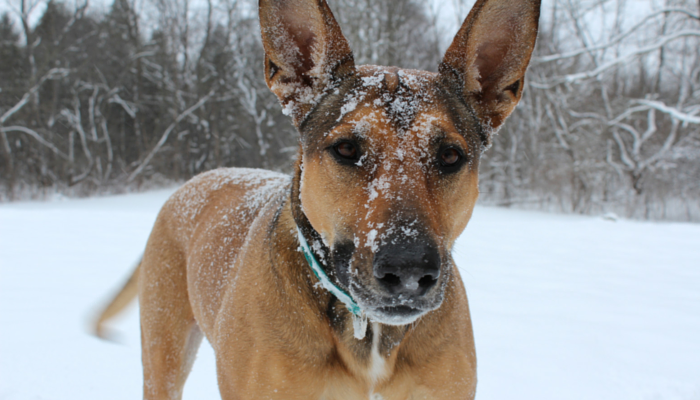 Why did you grab the camera? You’ve got more snowballs to throw.

But snow stuff aside there’s been a lot of great dog articles this week. From sweet dog inspired cupcakes to a new IQ test for dogs here’s my favorite dog stories, deals & videos of the week. I hope you enjoy them as much as I did.

Dogs’ New Challenge: Find a Bomb Before it Becomes a Bomb
Bomb detection dog training is getting much more sophisticated. In addition to being trained to just detect single explosive ingredients they’re being taught to determine whether the agents they smell can be combined to form an explosive mixture.

“In the United States, defense research agencies spent billions of dollars over the last 15 years trying to create a technical replacement for the nose of the dog, and at the end of all that they just had to admit ‘No, we cannot get close.'”

Scientists Create IQ Test For Dogs, and It Could Help Humans Too
Scientists created a new IQ test for dogs and the initial results show that dogs do have measurable IQs. They’re hoping with a better understanding of canine intelligence they can help understand some of the causes of dementia.

“Dogs are one of the few animals that reproduce many of the key features of dementia, so understanding their cognitive abilities could be valuable in helping us to understand the causes this disorder in humans and possibly test treatments for it.”

Is Your Dog Always Pulling on Leash?
Great tips that I’ve used myself for Laika who used to pull on leash. I’m thrilled to see a guide on loose leash walking that understands that “being a tree” doesn’t usually get great results.

A front-attaching chest harness is a great alternative which uses the same principle as the head collar. When the dog tries to pull forward, the harness causes their body to turn sideways towards you instead. A harness has the added benefit of taking the pressure off the dog’s neck.

Fucking Crazy Animal People
If you’re part of any animal rescue groups on facebook I’m sure you’re familiar with how out of control & heated the comments can get. And unfortunately those sorts of outbursts make all of us involved in animal advocacy look rather crazy.

I am all for saving animals in need. I know our country’s laws are woefully inadequate when it comes to saving injured and abused animals; they allow too many animals to suffer before they intervene, but this kind of animal activism is not helpful. It hurts the animals and it hurts those of us who are serious about helping them. It makes all of us look like crazy animal people.

10 Ways Having a Dog Makes Your Home Better
Simple list in honor of National Dog Day that shows how having a dog in your home just seems to make everything better. I know Laika certainly gets me off my butt every day.

Dogs (and their boundless energy and need for exercise) make you move more. They can help fight off getting into a couch surfing rut. How many long or lazy days has your dog’s walk been the exercise you got for the day — and improved your mood because of it?

This little dancing dog was adopted after this video went viral 🙂