You are here: Home / Dog Articles / 3 Things I Miss About Owning a Dog in the Suburbs 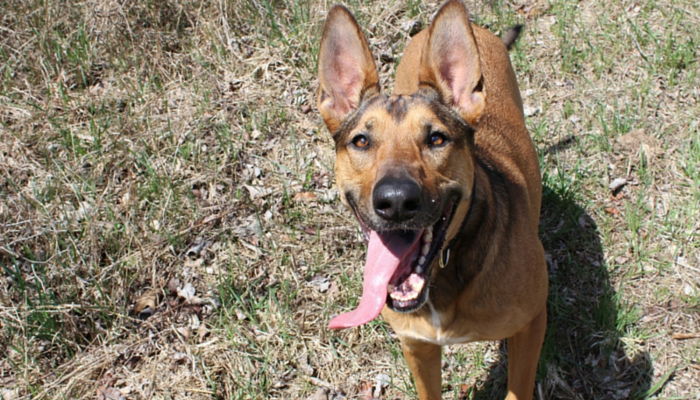 3 Things I Miss About Owning a Dog in the Suburbs

When I bought my home my first priority was having a big yard – and I got it. While I love my home and yard there are a few things I really miss about living in a neighborhood; sidewalks and less bugs immediately come to mind.

What I Miss Most About Owning a Dog in the Suburbs

I grew up in the suburbs; things like sidewalks were a given. When I bought my home I moved out of the suburbs and went for the biggest yard I could find.

I wouldn’t trade my home or big yard on a little dirt road for anything; but there are a few things I could do without. Mostly bugs and random gunfire. I don’t know if it’s a Michigan thing or a rural thing but I’ve heard so many people shooting their guns around here it’s just normal background noise at this point. It did take a few years to get used to though.

But gunfire aside here are the 3 things I miss most about living in the suburbs with my dog.

While I love the solitude of a nice morning walk down our dirt road with no one in sight it’s often interrupted by someone speeding by at 45 mph. I credit this to the speed limit law here in Michigan that states any highway (including gravel roads) without a speed limit sign can be designated at 55 mph. And although my road is considered residential and falls under the 25 mph speed limit most treat it like their own personal Autobahn.

It wouldn’t be much of a problem at all if our dirt road happened to be somewhat level or wasn’t surrounded by 4 feet embankments. There really isn’t a quick and easy way to get off the road. I haven’t had any close encounters yet, but I’m always having to check behind me.

When we do happen to encounter someone on our road it’s usually someone on a horse walking a bunch of unleashed dogs. Not always the easiest scenario for Laika and I but we’ve managed to keep our cool.

Sometimes I miss the convenient things in life; like walking on a nice sidewalk. I’d be able to stop worry about being ran over every day and I wouldn’t have to trim Laika’s nails nearly as often.

I cannot take Laika on a walk down our road without encountering some dead animal. Snakes, turtles, opossums, turkeys, deer, squirrels, rabbits; you get the idea. And because dogs are gross if Laika gets within 2 feet she immediately drops to the ground to roll in them; every single time.

Over this past winter alone we found 4 dead deer within a few weeks. People hit them with their cars and take off; likely because it is a dirt road and there’s no one there to report it. We also have a serial fish dumper on our road. Someone dumps a garbage bag full of dead fish (mostly carp) along the sides of the road a few times a year. Dirt roads are popular dumping grounds around here for more than just furniture and appliances.

There has not been a single walk where we haven’t found a carcass; but luckily I’m usually able to spot it beforehand and walk to the other side of the road.

Fewer Bugs aka Avoiding the Bugpocalypse in my Yard

This one really is my fault; I bought a home that has a swamp in the front yard and is surrounded by forest. I should have known how insane the bugs would be, and for the most part I don’t mind most bugs, but I hate all the ticks and mosquitoes.

I’ve tried attracting more bats to my yard with night blooming flowers but part of me says that’s like shooting fish in a barrel. Might be time to get a little bit handy and make some bat houses as well.

While I can handle bugs myself I always feel bad for Laika; they really seem to love her. After every single venture outdoors we have to do a thorough bug check; the same method I use to check for fleas. This weekend I had the joy of removing my very first tick from a dog. Now the dead tick is sitting in a jar in my garage as I carefully monitor Laika for the next few weeks for any signs of illness.

Ticks are gross; it took so much pressure to get that sucker to detach from Laika. I was surprised that she got it from hanging out in our backyard while I did some yard work; not from one of our adventures in the woods.

We also have the privilege of having yellow jackets that nest underground. Nothing gets you moving quite as quickly as the sound of those suckers swarming after you accidentally step on their home. Lucky for me there are some “wild” turkeys that roam the neighborhood and do a great job at picking those nasty buggers out.

I Still Wouldn’t Trade My Big Yard for Sidewalks

Is it inconvenient to not have a sidewalk? Yes. But does it really bother me all the time? Not really. We have two wonderful parks within 5 miles of our home; I take Laika there every other day for a nice relaxing walk. I also have the most amazing woods with a ton of trails surrounding my home; we just walk right to them from our own backyard.

Maybe the grass is always greener on the other side; it’s easy to dwell on the things we don’t have anymore and forget the things we’ve gained. When I lived in the suburbs I wished for more woods and less traffic which I’ve certainly gotten. You can’t put a price on being able to walk your dog into the woods right from your own backyard. 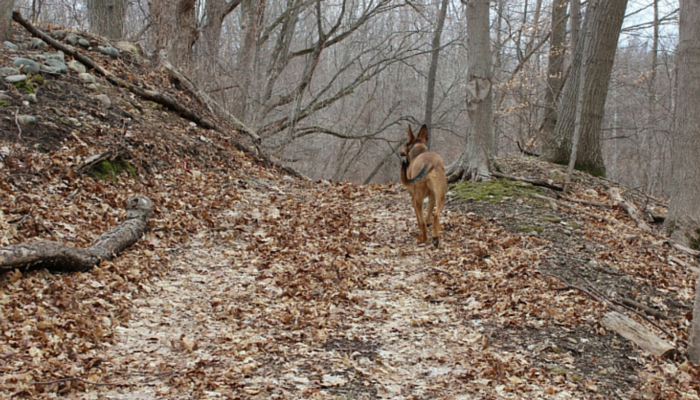 Not our dirt road; just one of the awesome dirt bike trails we love to walk when it’s not overgrown.

What Do You Love About Your Neighborhood?

Do you live in the city, the suburbs, or a rural area? What do you love about it when it comes to owning a dog? What do you hate about it?

Aren’t sidewalks the best? I never realized how much of a convenience they were until they weren’t available anymore. If I could avoid dodging speeding cars at 6am I feel like our walks would be a bit more relaxing. But then again it does wake me up better than any cup of coffee ever will.

Dog Walking Week - Mud, Snakes, & the Hippy
The Liebster Award - 11 Questions
Holy Cow - It's Our One Year Blogiversary
Puppy Leaks - A Year in Review 2015
« Why Do Female Dogs Get Blamed For Dead Grass?
Roundup 16 – Our Favorite Dog Articles, Deals, and Videos of the Week »