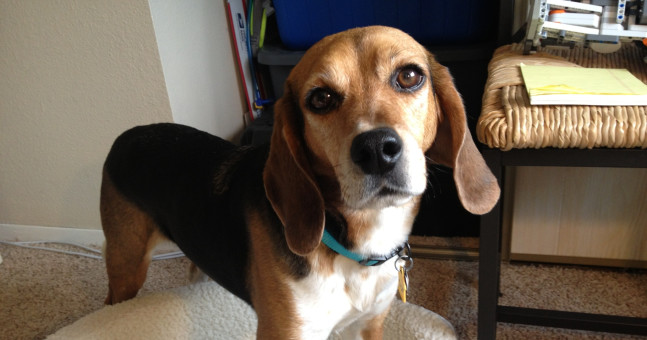 Last updated on December 29, 2017 By Puppy Leaks Leave a Comment

Dave Snyder, 27, of Fort Collins lost his beloved Beagle TJ seven weeks ago. Snyder adopted TJ from the Larimer Humane Society a year ago. TJ grew up in a Wyoming research facility before being rehabilitated and placed for adoption. The first few years of his life were spent in a cage. He was gradually introduced to grass and other normal dog experiences for research purposes.

When Snyder took him home he says he wasn’t a typical dog. “He wasn’t a normal little guy when we got him,” he said. “He didn’t bark for over a year. He didn’t know what to do with a yard.” TJ spent the first few years of his life in a research lab in Wyoming. He was used in a Lyme Disease study and a dental study.

The dog ran away from his pet sitter on May 14 in City Park. Snyder put up fliers everywhere and searched desperately for his lost companion. He put up ads on craigslist and went door to door in his Fort Collins neighborhood looking for tips. He even hired a private K9 search team to help find TJ.

There were several TJ sightings during May and early June but every time someone would approach him he’d take off again. The sightings continued and tracked the dog south through Laporte and eventually Boulder, 50 miles away.

Snyder says the calls suddenly stopped on June 8, there were no more sightings of TJ. He feared the worst and began mourning for his lost companion.

On Wednesday Boulder Animal Control called Snyder after finding a microchip on TJ to let him know that had found his dog badly injured after being hit by a car.

As of Thursday TJs prognosis is unknown, he pulled through surgery though he did have his right rear leg amputated. He’s going to need an additional surgery to help stabilize his front leg so Snyder has set up an online fundraising campaign to help cover the expected $12,000 cost.

TJ is currently rehabilitating at the Aspen Meadow Veterinary Specialists in Longmont. He’s expected to stay under their care for at least another week. TJ’s still in rough shape requiring 24 hour care. Snyder is hoping for a speedy recovery and that he can take his best friend home soon.