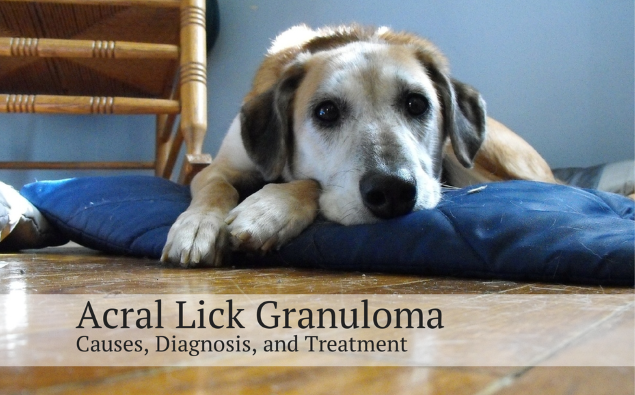 Does your dog lick his paws all the time? Have you ruled out allergies and other irritants?

If so it could be Acral Lick Granuloma, which is defined as the excessive licking of the paws and limbs in dogs.

Without intervention lick granuloma can get much worse, leading to lesions and hair loss. Learn how to help keep your dog from excessive licking.

Acral Lick Granuloma is Caused by Excessive Licking in Dogs 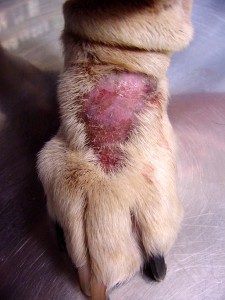 Acral Lick Granulomas, also referred to as Acral Lick Dematitis (ALD), is classified as a skin disorder in dogs. The granulomas themselves are skin lesions caused by excessive licking. The lesions result in a thickened, raised, firm plaque that is insensitive to pressure.

The behavior of excessive licking is a form of self trauma that most often has a psychological cause such as boredom or anxiety. It’s similar to obsessive compulsive disorder in humans.

The lesions caused by lick granuloma are commonly found on the front limbs of the dog around the ankle or wrist. Occasionally they’ve been diagnosed on the end of a dogs tail. The lesions appear as hairless, irritated patches of skin and can become hardened and covered by plaque as the condition worsens.

Any breed of dog can be effected, but it’s commonly seen in large, active breeds of dogs that are left alone for long periods of time. It’s often attributed to boredom and lack of external stimuli. It can occur at any age, but it’s most commonly diagnosed in dogs five years of age or older.

Many dermatologists think that boredom is a major underlying factor in some cases of Acral Lick Granuloma. The dog’s licking activity helps pass the time. – PetMD

Acral Lick Granuloma is a skin disorder where an animal obsessively licks a small area of their body until it becomes red and inflamed. The legions appear as hairless, irritated areas on your dogs skin usually found on the distal extremities. At first the legions appear red, swollen, and cause bleeding; similar to a hot spot.

When a dog constantly licks a certain area they can develop granulmoas which appear as:

As the condition worsens the lesions the skin can become ulcerated, raised, and thickened. The pigment around the edge of the lesion can change if the licking continues.

Unfortunately excessive licking isn’t a symptom that’s just specific to just granlomas. It can be seen in dogs with allergies, joint pain and other conditions.

If your dog is licking more than normal, or is excessively licking a specific spot take him to the vet for a diagnosis. They can help determine whether it’s caused by lick granuloma or something else. And they can help you come up with a treatment plan that’s right for your dog.

The Causes of Excessive Licking in Dogs

In the majority of cases the causes of lick granulomas are psychological. They’re often related to stress, separation anxiety, compulsiveness, or boredom. It’s often considered a form of canine obsessive compulsive disorder.

In most cases the licking begins because the dog is bored, is kept in excessive confinement, or lacks external stimuli. The excessive licking promotes the release of endorphins which act as a reward for the repeated behavior.

Large, active breeds are most commonly affected by ALD. It can occur at any age but most diagnosis’ are made after the dog is five years old.

The condition becomes a vicious cycle; the erosion of the skin leads to pain and itching which causes more licking. Testing of the thyroid should also be done,  as hypothyroidism has been seen to play a role in some cases.

In a few cases dogs have been diagnosed due to an underlying orthopedic or identifiable neurological condition.

The act of excessive licking may be a compulsive disorder (displaced behavior) associated with stress (e.g. lengthy confinement, new child or pet, death in the family, moving, boredom), fear, or separation anxiety. – DVM360

Breeds that are more prone to excessive licking include:

Acral Lick Granuloma must be differentiated from several other skin conditions in dogs. Bacterial or fungal infections, pressure sores, and mast cell tumors must be ruled out. Dogs should be tested for allergies.

Finding ways to keep your dog busy and relieving boredom are important to successfully treat Acral Lick Granuloma. Medical treatments alone can’t always stop the behavior. It’s not uncommon for it to reappearing later on.

Identifying the primary cause is essential. It’s often caused by psychological stress such as the dog being left alone all day, being bored, confined often, changes in their routine, or changes in the household itself. These underlying issues must be addressed to prevent future flare ups.

Correction of these causes include increased physical exercise, avoiding confinement, and giving the dog more interaction at home. Hiring a dog walker, coming home at lunch, the introduction of new toys, or enrolling a dog in outside activities can all lead to a reduction in the underlying stressor.

Drugs may be used in treatment until the behavior modification has had time to take effect. Common drugs prescribed are antidepressants, anti anxiety medications, or endorphin blockers.

The lesion may be injected with a synthetic corticosteroid drug, such as Methylprednisolone or Triamcinolone. Other treatments for the lesion include laser therapy, cryosurgery, radiation therapy, and acupuncture.

The lesion may be treated with antibiotics. Bacterial infections are common within the granuloma itself which leads to extra irritation. Mechanical restraint with the use of an Elizabethian collar is commonly used.

Treatment for Acral Lick Granuloma’s is time consuming and difficult. Most treatment plans last a minimum of six weeks to ensure that the dog has had enough time to fight any infection within the lesion.

The diagnosis for Acral Lick Granuloma is guarded; once the treatment has discontinued new lesions often occur. Properly finding and treating the underlying cause is essential to successful treatment.

How to Help Manage Your Dog’s Lick Granuloma

Most granulomas develop due to psychological stress so it’s important to give your dog fulfilling things to do throughout the day.

If you work and your dog is left alone during the day you can hire a dog walker. Check to see if any of your neighbors would be willing to come over & let your dog out to play for a few minutes during the day. Give them a stuffed frozen Kong before you leave for work to help keep them busy.

Develop a healthy walking routine with your dog. For most dogs the daily walk is the only they get for a little freedom each day, use it as an opportunity to give them some physical & mental exercise.

Come up with some simple games & activities you can play indoors. Teach your dog some nose work or play some tug of war.

Dogs have been bred for thousands of years to work alongside us. Since most of our dogs don’t have an actual job to do (such as herding sheep), it’s up to us to find engaging activities for them to do.

You’d be surprised at how much of a difference the addition of a daily walk & 10 minute game of tug can have. An extra 30 minutes of attention can make a world of difference to your dog. Help keep your dog both mentally & physically challenged each day.