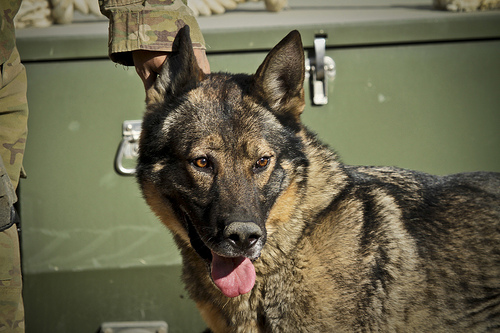 Last updated on September 19, 2017 By Puppy Leaks Leave a Comment

Jose Armenta was serving in Afghanistan with his military dog Zenit, their job was to search for explosives.   Armenta was inured in 2011 while searching for explosives, he ended up having both of his legs amputated above the knee.  When he returned home he realized how much he missed his partner Zenit, who was not injured and had kept on working with another handler.  Armenta went through a lengthy process but was able to adopt Zenit in 2012.

He speaks in this interview about how his dog transitioned to civilian life.  ”  It changed a lot. A lot of these dogs, they have emotion when you give them their toy, when you praise them for a job well done, but other than that you don’t see a lot of emotion out of them. … But now he chases his tail and digs holes in the yard and loves steaks. I don’t think he even knew what a steak was. So he’s changed a lot.”  Armenta was recently on NPR’s Fresh Air where he spoke more in depth about the journey back into civilian life with his companion.  Armenta and his military dog Zenit are featured in the June issue of National Geographic “Hero Dogs.”

Eliana and Jose Armenta relax with their Boston terriers, Oreo and Sassy, and their German shepherd, Zenit. A retired Marine dog handler, Jose lost his legs in an IED blast while on patrol with Zenit. In 2012 he adopted Zenit. “Dogs complete our family,” he says, a family soon to include a baby.

Listen to their full story on NPR