You are here: Home / Health / What You Need to Know About Ear Cropping 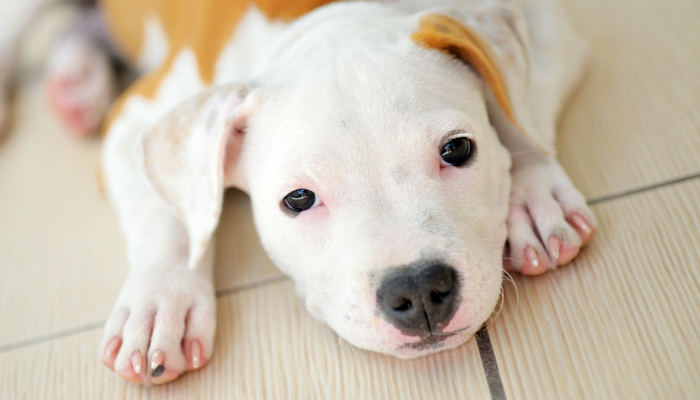 What You Need to Know About Ear Cropping

Should our dogs be subjected to elective cosmetic surgeries such as ear cropping? Supporters of the practice cite the reduced risk of ear infections that come with it, while those against call it completely unnecessary. Here’s what you need to know about ear cropping.

So you think cropping your dogs ears will help fight off ear infections? Think again.

Proponents of ear cropping love to tell you that it’s not just for looks – it’s for their dogs health. The problem is that cropped ears don’t actually help protect against ear infections. Approximately 80% of dogs never get an ear infection, and that estimate includes all dogs whether their ears are cropped or not.

The number one risk for ear infections is genetic predisposition, and dogs that traditionally have their ears cropped aren’t in that list.

Certain breeds with long, floppy ears are prone to ear infections it is true, but that’s not the case for Pit Bulls, Great Danes & Dobermans – breeds that commonly have their ears cropped. Dogs such as Cocker Spaniels & Bassett Hounds, which are prone to chronic ear infections, have a greater density of apocrine glands & other genetic factors that increase their risk for infection – not just because their ears as floppy.

This clustering of risk factors suggests the risk of otitis externa in pedigreed dogs must be considered on a breed-by-breed basis, and that grouping study samples by ear shape (e.g., pendulous or erect) may not be justified. – Ear Cropping & Canine Otitis External FAQ, AVMA

A dog’s genes are what makes them prone to chronic ear infections, not floppy ears. Despite what supporters say there’s no health benefit to cropping a dogs ears, it’s just for looks.

Humans have the luxury of choosing to undergo cosmetic procedures if we want, our dogs aren’t so lucky. We’re the ones who decide on their behalf.

Have you seen an ear cropping procedure? If you get queasy by the site of blood I wouldn’t recommend watching one. (though if you’re curious it’s not hard to find plenty of them on Youtube) Under general anesthesia the dog (usually between 6-12 weeks old) has up to 2/3 of their ear cut off.

After the surgery the dog wears tape & bandages around the ear – in hopes of getting them to maintain an upright position. I say ‘in hopes’ because I’ve seen plenty of botched procedures that end up looking pretty horrendous.

Because the practice is elective & for cosmetic purposes it’s come under a lot of scrutiny from animal welfare groups & veterinarians.

Ear cropping has been banned in parts of Canada, all of Australia, New Zealand & in Scandinavian countries. And in 2009 Banfield Pet Hospital, one of the biggest veterinary chains in America, discontinued cosmetic ear cropping & tail docking.

After thoughtful consideration and reviewing medical research, we have determined it is in the best interest of the pets we treat, as well as the overall practice, to discontinue performing these unnecessary cosmetic procedures. – Banfield Discontinues Cosmetic Ear Cropping, Tail Docking 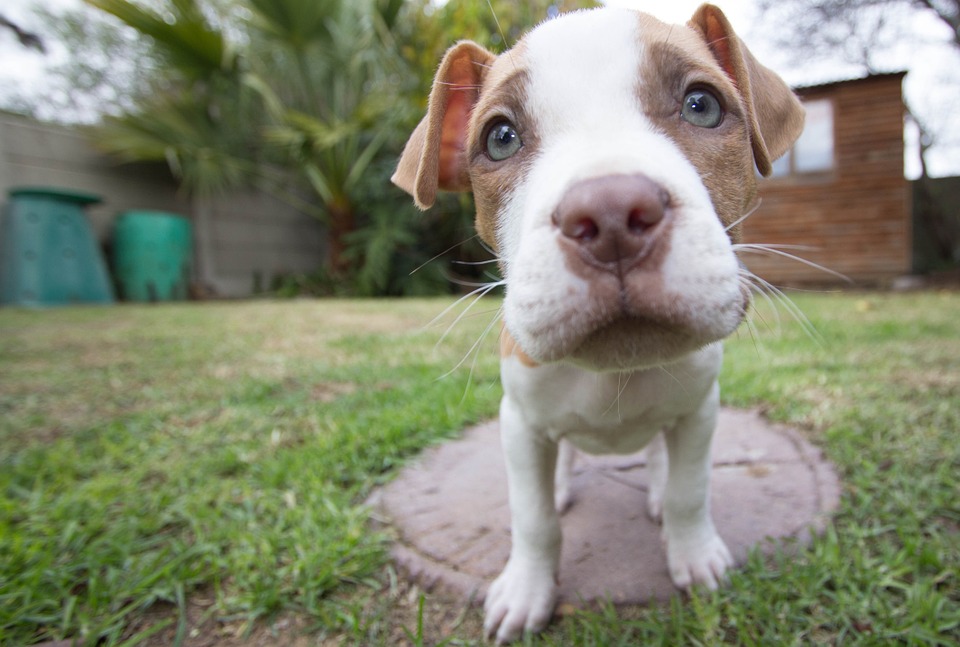 Comparing Ear Cropping to Spaying & Neutering is a Common Defense

In my research I found a lot of arguing back & forth about spay & neuter surgeries, and whether they’re necessary. The argument is that just like ear cropping we choose to spay & neuter our pets, which makes it an elective surgery.

While this is true that it’s elective there’s a big difference between choosing to cut some of your dogs ear for looks versus spaying & neutering our pets to help fight against the millions of homeless pets that are euthanized each year. Spay & Neuter helps control unwanted litters of pups that are at risk for ending up shelters.

Approximately 1.7 million homeless dogs are euthanized in American shelters each year. While it’s a nice try for some sort of valid argument the fact remains – dogs aren’t euthanized because they have floppy ears. There’s a big difference between taking steps to help control the pet population via spay & neuter vs cropping a dogs ears.

Comparing ear cropping to spaying & neutering is ridiculous, it’s apples and oranges to me. 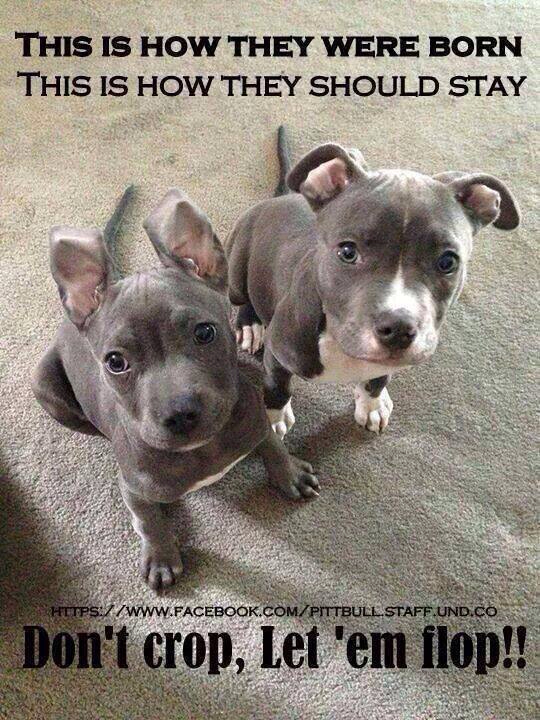 Don’t Crop, Let Them Flop via No Tail Left Behind

Choosing to crop your dogs ears is a decision made for your benefit, not theirs. It’s made because you prefer the look of an upright ear over floppy.

Maybe you think it makes your dog look more imposing, or maybe you just prefer upright ears. That’s fine, but at least admit that it’s done for your benefit alone, not the dogs.

While I’m not going to assume I know how painful the procedure is, and whether there’s a lot of psychological trauma involved I can say this – I don’t think your dog would choose to have a lot of their ears cut off – it’s not beneficial to them in any way.

Ear cropping is done for cosmetic purposes, not medical. Why risk an unnecessary medical procedure? Why can’t we just let our dogs remain the way they were when they came into the world – with those natural, floppy ears.

Breed clubs tell us there were medical or work-related reasons for cutting off body parts years ago, which they say ended up setting a “breed standard” for people’s expectations of their appearance. There isn’t evidence pertaining to any medical benefits of removing body parts or even logical explanations of why the practice continues (other than the horrific truth of fighting dogs having less to bite when ear flaps, pinna, are cut off). Dr. Karen Becker, Is Cropping Dogs’ Ears & Docking Tails Cruel?

How Do You Feel About Ear Cropping?

Does your dog have cropped ears? If you were to adopt a Doberman or Great Dane would you choose to have their ear cropped? Have you seen any botched ear croppings? 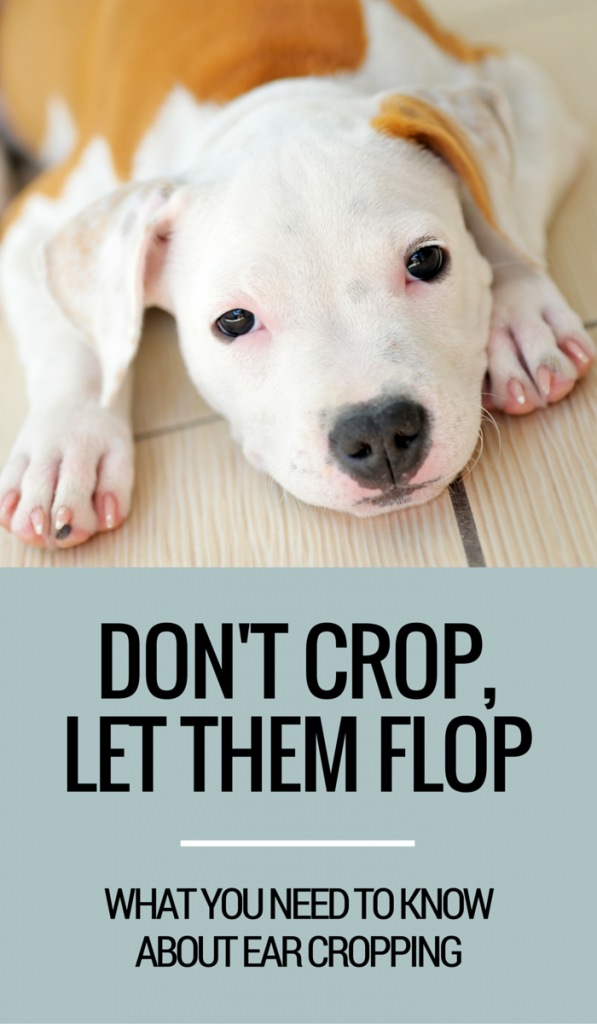 Not a fan of ear cropping? Help spread the word.