You are here: Home / Dog Articles / How a Stray Dog Became The First Animal to Orbit Earth 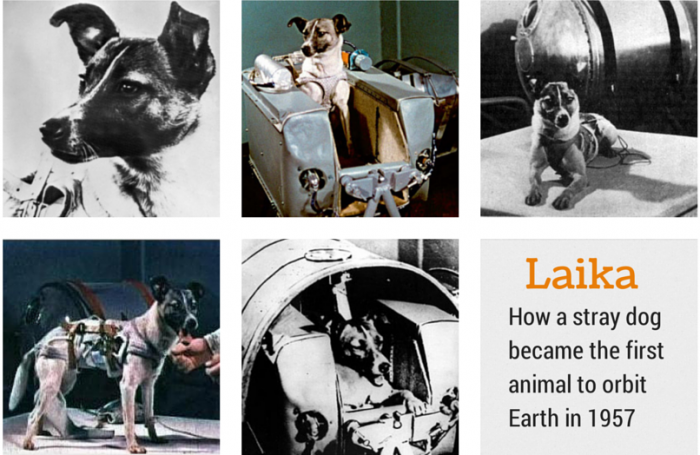 How a Stray Dog Became The First Animal to Orbit Earth

A stray dog named Laika became the first animal to orbit Earth in 1957. It was decided that a stray dog was perfect for this mission since they were already accustomed to living in harsh environments. Laika was the chosen candidate due to her good nature. And yes – she’s the reason I named my dog Laika.

The Soviet Union launched Sputnik 2 on November 3, 1957. Aboard was a little dog stray dog named Laika who became the first animal to orbit Earth.

How a Stray Dog Became the First Animal to Orbit Earth

November 3 1957 Sputnik 2 was launched into space. It’s the second spacecraft launched into Earth’s orbit and the first carrying a live animal. Laika, a dog found wandering the streets in Moscow was on board, she became the first living animal to orbit the Earth. She was chosen from 10 other canine candidates because of her even temperament.

After the success of Sputnik 1 the Soviet Union were in a hurry to produce another spacecraft. This was during the great space race between the Soviet Union & the United States. They had already launched the first satellite, Sputnik 1 into space and they wanted their next mission to be even greater.

To go further with Sputnik 2 they decided on a orbital flight with a dog; no living creature larger than a microbe had been launched into space, so the dog would become the first mammal to orbit Earth. They had already put 12 dogs into sub orbital space on ballistic flights. The decision to launch Sputnik 2 was made in early October, giving scientists only 4 weeks to design & build the spacecraft. 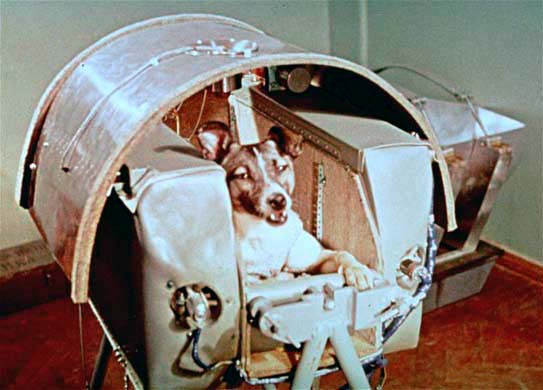 How Laika Prepared For Liftoff

Laika had been found by scientists as a stray on the streets of Moscow, they figured the strays there would already be conditioned to deal with harsh environments. Laika was a mutt, weighed 12 pounds and was about 3 years old. To get her used to the small confines of Sputnik 2 the scientists kept her in progressively smaller cages for up to 20 days. The close confinement caused her to stop urinating or defecating.

Laika was placed in centrifuges that stimulated the acceleration of rocket launch and placed in machines that emulated spacecraft noises. The stressors caused her pulse to double and her blood pressure to greatly increase.

The craft had an air regeneration system to provide Laika with oxygen. She would receive food & water in gelatinized form through a dispenser. Laika had a harness to chain her in place, a bag to collect waste and electrodes to monitor her vital signs.

Laika was placed into Sputnik 2 three days before it launched. The conditions were cold before the mission began so they used a hose connected to a heater to keep her container warm. Prior to liftoff she was sponged in weak alcohol and groomed, iodine was placed onto the areas of her body that were to be monitored.

One of the technicians on the Sputnik 2 project stated “after placing Laika in the container and before closing the hatch, we kissed her nose and wished her bon voyage, knowing that she would not survive the flight.”

On November 3 1957 Sputnik 2 was launched, it successfully made it into Earth’s orbit. Shortly after reaching orbit one of the cores did not separate correctly, preventing the thermal control mechanism from working properly.

Thermal insulation tore lose and the temperature inside the cabin’s interior reached 104 F. During the acceleration Laika’s pulse had increased to 3 times normal. After 3 hours of weightlessness it settled back down on 102 beats per minute, 3 times longer than it had taken on their preflight tests, proving the amount of stress she was under. After 6 hours of flight no further signs of life were detected.

The scientists hadn’t planned for Laika to return. No recovery mission had been planned. They had originally planned on euthanizing her with serving of poisoned food.

After the Sputnik Mission

The Soviets gave conflicting reports about how Laika had died. At first they claimed she had been suffocated, years later it’s been revealed that she died from overheating although the exact time of death remains uncertain. Five months after the initial launch Sputnik 2 disintegrated during re-entry on April 14, 1958.

Sputnik 2 caused a lot of debate about testing on animals across the globe. There were protests held outside the United Nations and New York. One of the scientists who worked on Sputnik later stated “Work with animals is a source of suffering to all of us. We treat them like babies who cannot speak. The more time passes, the more I’m sorry about it. We shouldn’t have done it… We did not learn enough from this mission to justify the death of the dog.”

Western countries saw it as a dog being exploited. To get around this issue, the Soviets canonized her, making her a hero who had sacrificed herself for the greater good of her country.

Further space missions carrying dogs were designed to be recovered. Laika and other animals who helped space research are now regarded as heroes.

The Beginners Guide to Lure Coursing for Dogs
33 Simple Ways to Keep Your Dog Busy Indoors
What Unethical Breeding Has Done To Bulldogs
« Dog Flipping On The Rise
5 Funny Dog Videos: Dogs Getting a Bath »